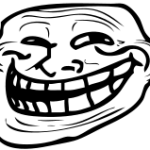 There has been a troll lurking around. Someone pasting certain words into Google in order to find sites where he or she, (probably he) might express their own particular views on a subject. Internet trolls tend to be more visible than their mythical counterparts, who lurk under bridges waiting for billy goats gruff to pass by. Trolls seem not to realize the trail they leave – and how easy it is to discover all sorts about them.

With the Internet you can discover all sorts of things about all sorts of people, what did people do before it arrived? If people wanted to know something about someone, what did they do? Did they phone colleagues, or business contacts, or fellow club members, or old boys/girls from the school they attended? Maybe one of the attractions of the Masons and the numerous other fraternal brotherhoods was the chance to access information that might not otherwise have been available?

There is no need now to roll up your trouser leg to find out the background on people, just type the name into Google and all sorts of information appears, but why would anyone bother?

Perhaps the searchers, particularly those nasty old trolls, don’t know that they themselves are being watched; perhaps they don’t know realize how much they disclose, perhaps they would be more circumspect if they knew Woopra provided the website owners with details of their Internet Service Provider, their location, the browser they use, even the way in which their computer screen’s monitor is configured.

It is the specific details of some blog readers that can make them seem strange. There have been times when people have typed my name and diocese into Google and then read the ‘About’ page? What is it they are looking for? Not looking for a job and not going anywhere, it seems strange that anyone would search for mundane personal details. Is talking about clergy who live in distant counties a very esoteric pastime? Do they Google other groups of people as well?

The problem with the Internet is that you cannot ask why questions are being asked. It is not like being at a dinner or standing in a pub. Access to a plethora of information is not of great use unless one knows what that information means; perhaps someone would devise technology to discern searchers’ purpose. In the meantime, the only reassurance is being able to watch the watchers, (like the man in Shanghai checking out a scam letter he probably sent).