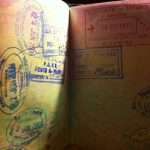 The good lady of the house carries the passport of her native island and inside the front cover appears the sort of detail that hardly gets noticed. In Irish, it reads:

Underneath, in English, the request is repeated:

The Minister for Foreign Affairs of Ireland requests all whom it may concern to allow the bearer, a citizen of Ireland, to pass freely and without hindrance and to afford the bearer all necessary assistance and protection.

Coming from the neighbouring island and carrying a British passport, which lies on the desk in preparation for travel, it has an altogether more imperious tone about it:

Her Britannic Majesty’s Secretary of State requests and requires in the Name of Her Majesty all those whom it may concern to allow the bearer to pass freely without let or hindrance, and to afford the bearer such assistance and protection as may be necessary.

Does anyone take this stuff seriously?

Does a statement issued in the name of a politician in Whitehall really carry any weight? If there happened to be an ambush somewhere in mid-Africa, will those responsible wave me on because the passport says it is required in ‘the Name of Her Majesty?’ If there should be a kidnapping, if someone decided a rural Anglican cleric might be worth capture, would it not be more likely that some minor diplomat would be sent to make very polite and discreet requests? There would be no requiring of anyone to do anything, for how would it be suggested that such a requirement might be enforced? Force of arms is the only bargaining ploy that counts outside of the liberal West. Suggesting Her Majesty’s Secretary State might do anything would have been greeted with laughter.

Why do we persist with these fictions?

The best thing about the difference in the passports is that British passport holders require no visa to enter Rwanda – it will cost my Irish companions €50 each.