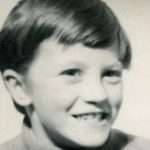 A Lufthansa flight to Frankfurt followed by Ethiopian Airlines to Addis Ababa and from thence to Kigal: a driver, meetings receptions – except, inside I’m the kid from the last council house in the row; reinvention only goes so far.

A friend comes to mind. From growing up with an unpromising future; serving as an ordinary squaddie in the British army; then working in a string of manual jobs; he began a transformation.  Workman’s clothes were replaced by slick suits; factory floors by an office in Mayfair; sandwiches in a lunchbox by expense account lunches with clients; package holidays by trips to India or Peru; hatchback car by a classic Mercedes; fun for him now is riding a Ducati motorcycle out for a day from his Surrey home or drinking in a wine bar on the Embankment.

Over a glass one day, I asked him, in my accent which passes as soft Ulster to the ears of most people here, ‘You don’t actually tell people that our school was a public school, do you?’

‘Of course not’, he said, ‘it’s just that when I talk to them at the club, they make assumptions’.

It seemed reasonable.  If you meet someone with a sharp Home Counties accent, in a gentlemen’s club in London, who talks about days at a boarding school, you tend to make a string of assumptions.

We laughed.  The only thing exclusive about our school was the brand of fundamentalist Christianity embraced by some of the staff.

But how much is it possible to reinvent yourself?

Then a dreadful thing happened. It seemed to me that Whelplay caught sight of me and at once bent his trunk forward in imitation of my twisted gait. Not only that, but he stretched forth his arms and began waving them to and fro, seeming to waggle his fingers mockingly. It is a mannerism I have when I am excited, so those who have seen me in court have told me. But how could Whelplay know such a thing: I was taken back again to those schooldays I had been reflecting on, when cruel children would imitate my movements, and I confess that as I watched the novice staggering about, bent and gesticulating, the hair rose on my neck.

Sansom’s character, Matthew Shardlake, is so conscious of the curvature of his spine that he assumes the delirium of someone suffering from poisoning is a re-visitation of the mocking he had endured as a child.

Do we ever move on from our early experiences, or do the uncertainties and lack of confidence come back to haunt us?

A friend in the long past, who went on to very lucrative things, once told me of an interview he had conducted with a very able candidate for a post in the bank for which he was working at that time, ‘It’s not that he wasn’t very well qualified for the post; it’s just that he would not have had the confidence to cope with the clients’.  It was a conversation that persuaded me that I would never have coped in the City. Now, I must pick up my bags and face Africa.