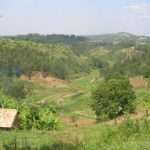 To Africa in the morning, for the fourth time in four years. However disorganised I may at present be, I am better than I was in 2009.

Sitting at Terminal 4 of Heathrow Airport in June 2009, there seemed a sense that the trip might cause me problems. In fact, it went smoothly (if one discounts being driven to a clinic in Kigali to be treated for food poisoning). On that summer evening, inspired by Marcus Brody from ‘Indiana Jones’ I wrote a blog called ‘Brody goes forth:

Oh dear, not a great start to the innings. Two wickets down without scoring.

Reaching Dublin Airport at 1130 for a 1340 flight seemed a healthy way to begin. But the omens were not good once check in was reached. It’s self service now, which all worked fine until the tricky bit: peeling the backing off the sticky strip on the baggage label. An exasperated staff member finally came over and said, “If sir pulled where it says ‘pull here’, it might work”. She took the label off me and had it stuck to the bag in a second.

It was 1200 before the fall of the first wicket. Through security, I searched for my phone. It was not in my jacket; it was not in my bag; it was not anywhere. Frantically calling Herself, to whom I had insisted that I had checked and definitely had everything. I got her answering service. “Don’t panic, Ian”, I tell myself, “You were going to buy a SIM card in Kigali, now you will have to buy a phone as well”.

Half an hour passed. Just check everything else is in order. A desperate search of the bag shows a special present being taken for a friend who is hosting me for two nights is also missing. Blast! It is still lying on my desk.

Another phone call and it’s the answering service again. “Hello, things are going from bad to worse”.

The Aer Lingus flight to Heathrow is crowded and bumpy and my hat got squashed under some oaf’s bag that is twice the size of what is meant to be permitted. It is half an hour after the plane has landed before the baggage reaches the hall.

Think now, think; even Brody is not as bad as this.

The present is replaced. It is not what was planned, but will be acceptable. What about the phone? A call to Dublin to discover the phone is at home, with the present.

Kenya Airways has the self-service check in. A smiling blonde at the bag drop says the boarding cards I have printed for the Nairobi and Kigali flights are for middle seats and would I not like window or aisle ones? She tears up the original boarding cards and prints off new ones. That’s what air travel used to be like.

Terminal 4 is as busy as an Irish country railway station on a Sunday afternoon. The cafe prices are exorbitant, but there’s WH Smith. Cornish pasty, £2.49 and a pint of milk, 60p.

The world seems not so bad until realizing that this is only Heathrow. The journey hasn’t stated yet; just wait for the real problems.

I escaped being called ‘Brody’, my companions called me ‘Ponsonby-Jones’ instead. To those with whom I will travel tomorrow, I am still ‘PJ’.