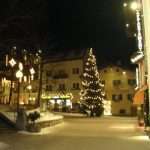 Sunday marked the first day of Advent, the season when the church remembers the first coming of Jesus as a child at Bethlehem and anticipates his second coming at the end of time. For the retailers, it was another day in the countdown to Christmas. The Christmas stock has been in for months, the decorations have been up for weeks, the sound of Christmas carols and songs in shopping centres has already become boring.

Eight years ago, when my wife was ministering in the city centre of Dublin, someone gave her a sheet of paper on which was printed ‘Mary’s Christmas Dream’. The following year, I posted it here. The story was unattributed and most of its appearances on the Internet post-date her being given the story, so its source remains unclear. Perhaps its source doesn’t matter. With just three weeks to go, perhaps the story is a timely reminder.

I had a dream, Joseph, I don’t understand it, not really, but I think it was about a Birthday Celebration for our Son. I think that was what it was all about.

The people had been preparing for it for it for about six weeks. They had decorated the house and bought new clothes. They’d gone shopping many times and bought elaborate gifts. It was peculiar though because the presents were not for our Son. They wrapped them in beautiful paper and tied them with bows and stacked them under a tree. Yes, a tree, Joseph, right in their house. They decorated the tree also. The branches were full of glowing balls and sparkling ornaments. There was a figure on the top of the tree. It looked like an angel might look. Oh, it was so beautiful.

Everyone was laughing and they were very happy. They were all excited about the gifts. They gave the gifts to each other, Joseph, not to our Son. I don’t think they ever knew him. They never mentioned his name. Doesn’t it seem odd for people to go to all that trouble to celebrate someone’s birthday if they don’t know them? I had the strangest feeling that if our Son had gone to that celebration he would have been intruding.

Everything was so beautiful, Joseph, and everyone was so happy, but it made me want to cry. How sad for Jesus not to be wanted at his own Birthday Party. I’m glad it was only a dream. How terrible Joseph if it had been real.