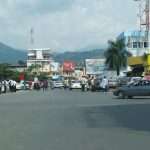 There was a sharp exchange of words and we drove away from the road block. ‘What did he want?’ I asked, as if not knowing what it was the policeman had demanded.

‘What did you tell him?’

‘That I was just your driver and that I had no money and was driving you to the airport and would then be paid’.

We laughed, except it was no laughing matter. Burundi languishes near the foot of the corruption league – down among the North Koreas and Zimbabwes of the world.

Yet, while priding ourselves on our transparency, it is worth pondering how much that transparency means.

Nobel laureate Dario Fo uses his humour to ask fundamental questions about our political systems. Accidental Death of an Anarchist was published in 1970. Set in Milan, it was inspired by the death of an anarchist in the city in 1969, who mysteriously flew out of a fourth floor window of a police station during questioning. It has gone through constant adaptations. In one of its English forms, a 1980s adaptation, one of the more reflective sequences suggests that our free press functions as no more than a tool of fundamentally corrupt governments.

REPORTER. In other words, it appears that even when there is no scandal, it’s necessary to invent it because it’s a marvelous way of maintaining power by providing an escape valve for the offended conscience of the masses.

FOOL. Certainly, the catharsis which liberates all tension. And you independent journalists ensure that this sacred process continues.

REPORTER. Then why does our government go to such lengths to hide its scandals every time we try to uncover them?

FOOL. Because we’re still a developing nation, practically pre-capitalist. If you want to see what we have to look forward to, take a good look at a more developed country like America. They have a President who falls asleep at press conferences and keeps forgetting which questions he’s answering. They ask him about one thing, he answers with something else. Then he contradicts himself, then they tell him what he said before. He says, ‘No I must have been mistaken.’ But the public has complete faith in him. ‘You thought I called you a son of a bitch, but I actually said it’s sunny and you’re rich.’ And then do the people lose confidence in a leader like that? No, they trust him even more. They say, ‘Yes, of course it is sunny and I am rich.’ And so the stock market keeps going up. It’s stronger than it was before. The important thing is to convince people that everything is going fine. America is up to its ears in scandal: The President’s advisors are being indicted, but he stands behind them until they’re convicted. Right-wing dictators re-invest US aid in New York real estate, and we welcome our money back. The police bomb people out of their houses in Philadelphia, and the mayor convinces them it’s a new kind of urban development. A nuclear reactor nearly melts down in Harrisburg, but we congratulate ourselves that Chernobyl was worse.

REPORTER. Meaning that scandals are the breeding ground of reaction?

If Fo is right, Western democracy may be held up by the illusion that we somehow make a difference, but even a illusion is preferable to a land where one hands money to policeman.