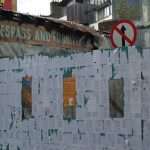 ‘We live in terrible times’, said the lady. ‘The country has become so violent’.

Has it really? Or is it the case that the threshold of what is considered acceptable behaviour has changed? Is it the case that we notice things more because we have, encouragingly, developed an intolerance towards violence?

‘He would be in prison now’, a man once commented to me.

His story had been about a member of staff at a boys’ boarding school, a clergyman who preferred the classroom to the church. He was known for the attention he paid to young boys as he went around to tuck them in at bedtime.

If he would be in prison now, what was it in the mind of people in the 1950s that allowed a pederast to interfere with boys at a fee-paying school? Was it regarded as somehow a harmless perversion for him to prey on children? Did anyone ask them how they felt about it at the time, or since then?

Some attitudes seem astonishing in retrospect.

In 1985 seminars were held in the Church of Ireland Theological College on preventing child abuse. It was a pioneering move at the time; people were loathe enough to admit that the problem existed, to include it in the training programme for clergy was radical. The person leading the seminars believed clergy would have access to homes and information that might be denied to others and needed to have some idea of how to recognise situations where children were in danger.

At a question and answer session, one of the students who had come from an urban working-class area said that what surprised him was that there was abuse in the homes of better off people. He said that when he was growing up everyone knew that there were homes where things went on, but they thought that such things only happened in poor areas.

If everyone knew that things went on in some homes, why did no-one do anything, or at least say something?

Child abuse seemed to be in a category with domestic violence as something that was common knowledge, but about which little was done.

Domestic violence was accepted as long as it wasn’t ‘excessive’. There was even an episode of Dixon of Dock Green where the avuncular George Dixon inferred that it was fairly normal for a husband to knock his wife about a bit, but it was a problem when the violence became too much.

Who decided what was excessive? Did anyone ask the wives whether it was OK to be knocked about a bit? Where in law did it say that beating up your spouse was acceptable provided it didn’t exceed certain boundaries?

When the lady considers the present times to be violent and when the media depict the streets as unsafe for walking, it would be wise to remember what was acceptable 30-40 years ago; what wouldn’t even have been classified as violence by some in those times, is to us something horrific and unacceptable. We are making progress.