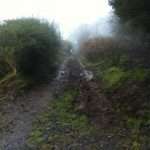 Stepping out of the car into the warmth of Burundi morning, the child made his way towards us. Both knees bent to the right and walking was a difficulty. His eyes were affected by a severe squint and it was difficult to know how easily he might focus.

Reaching out, he took the hand of my Burundian companion and then reached out for mine. He held tightly as we walked to a group of trees between which tarpaulins had been stretched to provide shade for the morning service.

At the end of the service, as the congregation dispersed. He came and stood beside my colleague, who took out his wallet and handed the boy a hundred franc note (worth about 5 cents). The boy headed off towards the road. ‘He likes to buy a doughnut after church’.

‘Will he receive any education?’

‘No. Look around you; look at this place. They have not even water. Do you think there are facilities where he might be educated?’

To suffer disability among the poorest people on Earth means a life of very limited prospects. The wealth of Irish society allows an inclusiveness of which most people in the world can only dream; were the boy living here a full educational package would be available for him, even with the cutbacks, the opportunities would be infinitely greater than those on offer in Burundi.

Inclusiveness of those with incapacity, however, seems to run only so far, some groups of people seem not to enjoy a level of provision that might make life even tolerable.

In the damp mist of a December afternoon, driving on an unclassified road, the turning to the right was marked with a ‘No Through Road’ sign, the road narrowed, but continued after the next turning to the right onto a road that wound into the hills. Parking the car at the bottom of a drive, the gate was held together with string and rope. Huge padlocks at each end indicated it was not to be opened; its degree of corrosion suggested climbing it would cause its disintegration; so there was no option other than to untie part of the web of rope and crawl through.

The driveway deteriorated to nothing more than mud. The resident at the end of it has a long history of mental illness and now lives in squalor in a derelict house. There is no-one to assume responsibility, no-one to declare that no human being should be allowed to spend their years in such abject conditions, even if, in the muddle of paranoia and delusion, they claim it is their choice. The apparatus of care that provides so well for others, seems simply to fail for some people.

The little boy in Burundi, going for his doughnut on a Sunday morning, enjoys a dignity greater than the resident of a derelict house in the December mists.