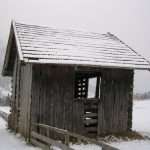 ‘And they came with haste, and found Mary, and Joseph, and the babe lying in a manger’. Luke 2:16

There was an old legend that at midnight on Christmas Eve, the animals all knelt to welcome the holy day. The legend inspired the English writer Thomas Hardy to write his poem ‘The Oxen’; Hardy would love to believe the legend was true:

Christmas Eve, and twelve of the clock.
“Now they are all on their knees,”
An elder said as we sat in a flock
By the embers in hearthside ease.

We pictured the meek mild creatures where
They dwelt in their strawy pen,
Nor did it occur to one of us there
To doubt they were kneeling then.

So fair a fancy few would weave
In these years! Yet, I feel,
If someone said on Christmas Eve,
“Come; see the oxen kneel

“In the lonely barton by yonder coomb
Our childhood used to know,”
I should go with him in the gloom,
Hoping it might be so.

Gathering for worship at Christmas, there are many people who have feelings similar to Thomas Hardy. There are people who would like the Christmas story to be true, but in their heart of hearts they don’t believe. But why not? If the Christmas story is no more than a legend, why is it not told differently? Would anyone make up such a story?

Let’s look at the different parts of the story and ask which bits people think are no more than legend.

The shepherds: We find the shepherds in Luke Chapter 2. They are part of material that Saint Luke has put together. Most biblical scholars would agree that there is a lot of conjecture on the part of Luke. At the very minimum, he cannot have been aware of the details of conversations that took place at least six decades before he began writing the Gospel; at most, some scholars would say that Luke has, not to put too fine a point on it, made the whole thing up.

But, if you wanted to faithfully reflect the traditions passed down to you, you would keep them in. Luke may have put together the conversations from his own thoughts on the subject, but in doing so doesn’t it seem likely that he was trying to tell the truth?

Turning from Luke to Matthew Chapter 2, we come to the story of the wise men. This is not visit of some great Eastern potentates, arriving in splendour and state – these are not three kings. This is the visit of an esoteric group of men, we’re not even told how many there were, we get the number three from the three different sorts of gift. They are men with no allegiance to any kingdom, we are told no more than they were ‘from the east’. They are troublesome men, men who ask questions, men who travel far, men who look for answers beyond human understanding.

Biblical scholars would agree that Matthew writes the Gospel for a Jewish readership, for people who attach value to the Jewish Law and Jewish tradition. If this is the case, then why would Matthew include the story of the Magi if it were not true? The Magi are Gentiles, they are from outside of the chosen people; you don’t make friends and influence people, by telling your readers right at the beginning of your story that people they have hated are now part of God’s scheme of things. Matthew is Jewish, he would not have been comfortable with these foreigners, but he includes them because he believes them to be part of the story.

Herod can cause us problems. He is a definite historical figure about whom there are some documented facts.We know he died in the year we call 4 B.C., which is how we know that the calendar we have now is wrong by between four and six years. This isn’t the problem, our way of counting the years was not calculated until five centuries after the time of Christ by a monk called Dionysius Exiguus. The problem we have with Herod is that Matthew records the killing of baby boys around Bethlehem and that there is no historical evidence for such murders.

How do we respond? Herod was a known thug and bullyboy, it would have been quite consistent with his behaviour to have ordered killings and having done so he would have hardly have been likely to have publicised the fact. Partly our problem arises because we see the story through Western eyes, we are used to the rule of law, to a free press, to the careful recording of public events. These standards don’t even apply throughout our world today.

I once met a Filipino community leader whose people were granted land by the government as part of the land reform programme.They built bamboo houses and started growing crops and raising livestock. The local landlord did not like this, he employed armed men who drove cattle across the crops, destroyed the houses and fences, and drove out the villagers. How do I know this happened?Because someone happened to take a video recording of it taking place. Otherwise who would have believed that an upright, respectable well-known landowner would have done such a thing? There are many crimes that go unrecorded; because something is not recorded, it doesn’t mean it didn’t take place. Moreover, the story of the slaughter of the babies doesn’t actually add anything to the story of Jesus, why would Matthew have included it at all if it wasn’t founded on truth?

The Christmas story doesn’t just include human elements, there are also non-natural moments, moments Christians would call divine: the Virgin Birth and to the visitations of the angels.

At the heart of the argument is one question, do human beings know all there is to know? We know so little about the incredible cosmos in which we live, yet there are people who would say that if we cannot understand something, if we cannot explain it in our everyday language, then it could not have taken place. The Virgin Birth and the visits of the angels are not events that fit into our current understanding of science, that doesn’t mean that they are not true.

The builders of the Christian Church spent centuries reading and praying and thinking and discussing and arguing and, sometimes, fighting. The Christian story as we well it has come out of that process.It is the best expression we can make of our inadequate human understanding of the God who is beyond all of us.

The Christmas story is not a legend, it is a mystery, but it is not a legend. We gather to celebrate a profound mystery, a God who is beyond all our understanding, yet a God whom we believe is with us – at Bethlehem and now and forever.