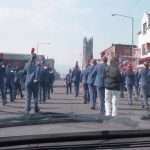 Returning to a rural Co Down community after a training placement in Belfast’s Shankill, I tried to talk to them about the plight of working class Protestant people. No-one wanted to hear. It was 1984 and traditional Unionism was in the ascendancy. A member of the congregation took the clergyman to task, ‘That fellow has no right to be talking about Protestant people like that’. There was a point blank refusal to accept that there might be growing grievances in poor Loyalist communities.

A decade later, and the Loyalists had embarked upon a campaign of sectarian slaughter against ordinary Catholic people. Few in the Protestant community were prepared to acknowledge that the monster had been created by years of neglect, years of denial. At the 1994 Church of Ireland General Synod in Cork, the Bishop of Connor made an impassioned speech about the desolation and desperation of the Loyalist estates, ‘Not for them tiocfaidh ár lá’, he declared, ‘and it is out of that desperation and hopelessness that come the mad dogs who maim and kill’.

The bishop’s voice was a minority. Working in a Loyalist community in the late-90s, three of us became concerned about a downward spiral in the communities where we ministered; whatever about the ceasefires, violence remained a feature of everyday life. Punishment beatings and the intimidation of families to leave their homes were frequent occurrences and members of the political wing of one of the Loyalist paramilitary groups agreed to meet a clergy group. We phoned numerous clergy; apart from the three of us, no-one was prepared to go to the meeting. The response in the town in which I ministered was no better; a clergy meeting called to discuss violence was told that the answer was for a member of one of the local bands to be converted and he would then bring a change in everyone else – of course, it never happened, but provided a ‘spiritual’ excuse for doing nothing.

The meeting with the members of the Loyalist political group the three of us attended did offer insights. One of them reflected that problems arose from the fact that violence was seen as a way of solving disputes by working class people. People had not recourse to professional channels or to the courts; if someone caused offence to the community, they would be beaten up, was his argument. Similarly, people trapped in the cyclical poverty of some communities found criminality an easy avenue to prestige amongst one’s peers and money for one’s desires.

The Protestant churches never ever made a systematic attempt at engaging with those communities, instead the years of progressively greater alienation continued. The mainstream political parties accommodated themselves to a new political dispensation where they shared power with former sworn enemies; those living in the places of hopelessness identified by the bishop in 1994, whose mindset had been fostered by the unionist leadership found themselves ever more marginalised.

The visceral and atavistic protests over the flag at the City Hall come from a long history of alienation. Perhaps those who contributed to that painful history might now do more to heal it.