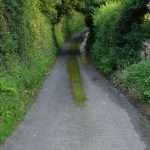 Our son had his student card, our daughter hadn’t hers. ‘Never mind’, I said to the man at the ticket desk, ‘give us three adults and a student ticket’.

‘But that’s two adults and two children’, I said.

‘Who’s asking?’ He responded. The lady checking the tickets didn’t even look at the tickets.

In a moment, we stepped back eleven years. ‘The Fellowship of the Ring’, the first part of ‘The Lord of the Rings’ had been released in December 2001 and on December evenings in successive years we went to see each part of the saga. Tonight marked the beginning of a new three year cycle, except this time it was ‘The Hobbit’ and the opportunity to renew acquaintance with Gandalf

The stories leave some people cold. Perhaps it is growing up in the land of Arthur and Merlin that makes Tolkien seem special. The Shire is a picture of rural England, of cottages and gardens and farms and tight-knit little communities. The hobbits are little people, ordinary people, unsophisticated people; people without power or status.

It is said that Tolkien believed that England once possessed a mythology to match that of the Nordic or the Celtic peoples and that he sought in part to create a mythology to match that of other nations. Yet his work is far too subtle and developed for it to fall into company with myths from elsewhere. Tolkien doesn’t tell mythical stories, he creates a complete civilisation and culture. He re-creates a pre-industrial world where mechanisation is the work of evil powers producing warriors of darkness.

The First World War and the wholesale mechanisation of destruction, is thought to have had a great impact upon Tolkien, yet his civilisation reaches much further back than the preceding Edwardian or Victorian ages.

Bilbo Baggins has no desire to leave is home; his wish is for his hearth and his books. It is easy to understand why no hobbit would wish to venture outside of the Shire for all they could possibly desire is there. Tolkien’s world is one in which peaceful coexistence is possible; in which diverse groups can inhabit the same space, though preferably not the same house, for hobbit houses are compact.  The Shire is a place  in which characters can be ruggedly independent and still live in strong communities.

Tolkien offers a vision of an idyllic agrarian, pre-industrial society. Of course, no such idyll ever existed, but the enduring appeal of his work suggests there is something in it which still strikes a chord with people generations removed from the land.