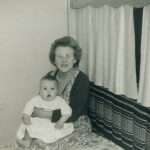 Today would have been my grandmother’s 100th birthday. This was the sermon I preached at her funeral at Huish Episcopi in February 2007:

“If only for this life we have hope in Christ,
we are to be pitied more than all men. ”
1 Corinthians 15:19

What to call a person when you talk about them at a funeral is always a problem. Looking at the names on the front of the order of service, it is strange, I don’t think I ever heard Geraldine used. To her closest contemporaries, it was always ‘Sis’; to her family it was ‘Mum’; to many it was ‘Mrs Crossman’, and for my generation, it was always ’Nan’. After 46 years of saying ‘Nan’, I don’t think I could cope with ‘Geraldine!’.

A week before Christmas, I called with Nan. Auntie Shirley showed me framed photograph they had bought of a steam train at Long Sutton and Pitney station, the railway halt most of us would have called Upton. Nan’s memories from that station are my last memories of her and perhaps the picture of a journey on a steam train can help us think about her life today.

Nan’s early journeys were journeys afar for her times. Being born in Aller in 1913, the daughter of Albert Luxton, a professional soldier and his wife, Emily Bond Woods, Nan lived for much of her earliest years with an aunt in Swanage—a beautiful place in which to form your earliest memories. Back in Aller from around the age of six to the age of thirteen, Nan’s education included time at the local convent school of from which she would recall happy days. At the age of thirteen, Nan went to live with another aunt, this time in Southampton. Work opportunities for a teenage girl in 1930 were fairly limited, but Nan would recall with fondness the work she found as a nanny to the children of Captain Daniel in Curry Rivel. Journeys in the years before Nan came to live at Pibsbury, weren’t without excitement and variety, they included a submarine trip with her brother Andrew who was serving in the Royal Navy in the 1930s. It’s hard for us, used to travelling far and wide and used to seeing everywhere and everything through television, to imagine what excitement such an experience would have brought into a country girl’s life.

Let’s go back to our picture of the steam train; steam trains make lovely pictures and evoke great nostalgia, in fact they were hard work. Maybe a good picture of farming life, nice to look at in a picture, not nearly so easy when it comes to the day to day reality. Nan came to the reality of farming life when she married Granddad in 1935 and came to live in Pibsbury. It was a hard life, home and food were secure, but there was nothing to spare for luxury or for frivolous expenditure. I remember Granddad talking about having a wage of 30/- a week in the 1930s; it cost 10/- to see the doctor in those days, not an appointment you would make easily. Nan was a great helpmate all through the years. Busy in the house Nan was a strict, but devoted mother. Dave talks about a stick that was bleached white, from its years of use stirring the washing, being Nan’s choice of weapon for threatening naughty children. I suppose those of us from a younger generation who were threatened with no more than the wooden spoon should count ourselves lucky. Nan worked hard on the farm, when not busy in the house. The coopy hens were a feature of her life right up until retirement years, there was the nightly task of making sure the chickens were all in before the house was closed against the fox.

Granddad and her family were always the first priority for Nan; life was not easy, there were the constant demands of the farm, but life was happy. Like the steam train that stopped at the station at Upton, Nan’s journeys through the years at Pibsbury were mostly short ones. The bicycle and the bus were big parts of her life. Women’s Guild on a Tuesday was an important engagement Nan sought never to miss. There was an order and a structure and a routine about Nan’s life that created a sense of security in her home. There was always a feeling in Nan’s house that whatever else might be going on in the world, all was safe and well here. I never remember anything untidy or out of place and woe betide Granddad if he trod on her kitchen floor with dirty boots.

Journeys far, journeys that were hard work, journeys near, the picture of the steam train helps us think about Nan’s life. Steam trains were also unpredictable at times. Nan could be unpredictable sometimes. As many of us know, Nan could get very cross – the gentle, matronly figure would disappear behind a very determined and formidable lady. Nan could also be very forgiving. One summer more than thirty years ago Steve and I went fishing and came back to Nan’s house for our tea. All we caught was eels and Steve gave each of them a whack with a lump of iron before leaving them in the tin dish in the back passageway from which the cats ate their dinner. The moral of the story is that lumps of iron don’t kill eels, because when poor Auntie Shirley walked through the back door later in the evening the eels were out of the dish and crawling towards the door. I never heard what happened—I got off scot free, Nan never mentioned it to me ever again. You could never predict what Nan might think.

One of the things that I always loved about railways was that they were constant. Even when you were sleeping, the trains would thunder down the line towards Taunton or towards Paddington—they were always there. Nan has been someone who has been always there. There are so many, many memories of Nan; we could make a list that went on for hours. Nan has been there for all of us for such a long time. It’s hard to imagine her no longer being with us; all those years of being out in the garden; all those years of cooking huge dinners; all those years of knitting and knitting, for family, for friends and for charity.

Nan was our constant friend, but we all knew that one day there would be a parting. There was an evening last summer when we called at Nan’s house after tea. Nan had gone to bed and I went up and sat with her for a while, talking about this and that. Maybe for the first time I realised that Nan couldn’t go on forever and that the fact that she had come so far was due to the devoted loving care of Auntie Shirley, to whom we are all indebted and to whom we owe heartfelt thanks today.

The thing that marks a train out from most other vehicles is that you know where it is going, it has to follow the tracks. The Long Sutton and Pitney train had to go towards Langport in one direction or Somerton in the other. Nan had a sense of heading for somewhere. In recent years, when I called, her parting words were ‘It’s prayer that keeps me going’ . Nan loved the fellowship she found in the Women’s Guild and always had the highest regard for the ministers in Langport United Reformed Church. It was more than friendship; there was a spiritual dimension to her life that I would never have known about had she not told me. Nan was heading for a destination beyond our imagination.

“If only for this life we have hope in Christ, we are to be pitied more than all men.” says Saint Paul. If this is our lot and there is no hope of anything to come, then what’s it all about? Nan didn’t think this was the end. Saint Paul is quite certain about it, Jesus back from the dead is the first to rise again.

Sixteen years ago next month, we buried Granddad from this church. When he was buried a sheaf of wheat was placed on his coffin – it was a hugely symbolic gesture: a sign of his lifelong work as a farmer; a sign that he had been gathered in like wheat at the end of the summer; a sign that just as the wheat sown in the ground springs up in new life, so we believe, as Saint Paul did, that those who are buried will rise again from the dead.

When we sing the harvest hymn in a few minutes time, it will be a looking back with thanksgiving for all that Nan meant to us, all those years on the farm; but it will also be a looking forward to a final gathering in.

“Even so, Lord, quickly come,
to thy final harvest home;
gather thou thy people in,
free from sorrow, free from sin,
there, forever purified,
in thy presence to abide;
come, with all thine angels come,
raise the glorious harvest home”.

With Nan and Granddad and with all the people we have loved, may we look forward to that final homecoming. May we be on the train that’s homeward bound.