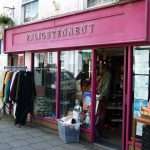 John Creedon was in provocative mood on his RTE Radio programme tonight, playing Rachel Harrington’s, ‘There’s a hippie in our house” followed by Merle Haggard’s, “Okie from Muskogee“; both songs articulating rural, conservative America’s objection to hippies. Someone must have emailed or texted the programme, for Creedon protested that he only played the records.

In rural, traditional England, no-one recorded a song against the hippies, but nor did we regard them with great fondness. The hippies were like exotic beasts to the people of our conservative English shire. They had ways of life which seemed strange to our old-fashioned farming community. They drove battered old vans. They had long hair and brightly coloured clothes. Some grew and smoked cannabis, a lot of the time without much attention from the police. They were altogether different from the people we knew.

It was supposed to be that if you were up in the air above Glastonbury, you could see the signs of the zodiac arranged in a circle in the countryside around the Tor. I looked at a photograph taken by an aeroplane of the area where you were supposed to be able to see these things; it looked just like fields and hedges to me. Years later, looking at a picture of the area on Google Earth, the zodiac remains as invisible as ever

The people who gathered around Glastonbury included some who believed in what my mother called ‘black magic’; trying to call up the spirits of the dead; trying to use the powers of darkness. They seemed to have believed strongly in the black and sinister powers. One man who got a house in our village is said to have moved because someone painted a pentagram, a five pointed star, a symbol of black magic, on the door of his house.

To be fair, most of them were innocent and harmless. They said they believed in love and peace (except, presumably, with those on whose doors they painted pentagrams) and seemed to think they could find it in our little corner of the country. For a while, there was a hippy encampment on a hill six miles from our village. Family groups lived in tepees. The women seemed to be responsible for most of the work while the men talked. Where they found money for food and petrol and the stuff of everyday life was never clear. Maybe they claimed National Assistance payments (or whatever social security was called at the time); maybe they came from wealthy families; there was no sign of them doing any work.

Strangely enough, forty odd years later, when Merle Haggard seems a singer from a bygone age, the hippies linger on. Go to Glastonbury and they are still there; as strange, to me, as they ever were.