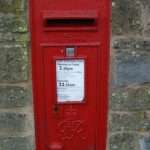 It is thirty years since I first read Philip Toynbee’s A Part of a Journey: An Autobiographical Journal, 1977-1979. It was bought on a New Year’s Day trip to Salisbury in Wiltshire in 1983. Only on reflection does the thought occur that the journal was not a reflection on times past, but on the world in which it was published – a world that now seems as remote as pictures on a black and white television programme. The fact that Toynbee was a writer prompted thoughts as to what means of communication he used in a past that is now another country.

Toynbee was living close to Monmouth, on the English-Welsh border, and writing book reviews for the English Sunday newspaper The Observer. How did he submit his the reviews? No email. Were there fax machines in the 1970s? He didn’t strike me as the sort of person who would have had cutting edge technology. Did he phone The Observer and dictate the review down a a crackly telephone line? Or did he type up his material and post it to London?

How did people communicate in that decade of loud music and bad fashion? We have had email in our house since February 1997 – I still remember our first email address 106522.740 at compuserve dot com – what did we do before then? Did we write lengthy letters, or did we phone each other all the time? Phone calls were expensive and letter writing was something enforced once a week in school days. In my case, I think I simply didn’t communicate, with anyone.

I remember reading The Observer between 1977 and 1979, they were the years I spent at Sixth Form College and Sandy Buchanan, our history teacher told us it was a paper to be read. I must have read at least something of what Philip Toynbee wrote in that time, for The Observer was a paper I approached with an awestruck seriousness. Did I never ask myself during that time how people like Toynbee sent in their material? Did I imagine that writers went into the newspaper offices and typed up all their material? Perhaps it was a question that simply didn’t arise – like the mysterious workings of the television set, it simply happened.

In a generation, the world has changed and we have forgotten what went before. Were the telephones still under the GPO in 1977? Were stamps 3p, 4p or 5p? How much would it have cost to phone London? Could you be a writer for a newspaper and never go near its offices?

How easy it is to forget things that were commonplace.