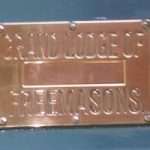 Black overcoat, grey suit, blue shirt – the very epitome of conventionality, I walked down Grafton Street last Monday. The snow had gone, to be replaced by a persistent, unpleasant sleet. I had imagined seeing them before, but this time there was no mistake – saffron trousers, white tops, short pigtails tieds at the back: the Hare Krishna people – complete with drums and finger cymbals. They must have been freezing, but the weather seemed no deterrent to their rhythmic chant as they headed north from Saint Stephen’s Green

The Hare Krishna people were frowned upon by two blokes I once shared a house with – they went on to be Hindu monks for a while, before one returned to social work, Catholicism, and got married, and the other went to work for an insurance company. I think they regarded the Hare Krishna crowd as insufficiently serious, or perhaps it was the other way round and they thought them too extreme; it was all beyond my comprehension, (much like the church is to most people).

The Hare Krishna people provide a bit of colour in an otherwise fairly monotone Ireland . There’s not much in the way of the esoteric in rural Ireland, and not much in Dublin either. There’s a low and dull Roman Catholicism, that doesn’t compare with the music and the liturgy of their counterparts in many parts of Europe – not for Ireland the Baroque churches and Mozart masses of Austria – and an even lower and even more dull Protestant tradition.

What about a bit of variety? England is full of all sorts of esoteric groups; people who believe in crystals and pyramids and ley lines and rebirthing. Maybe it is mostly fruitcake stuff, but it is different.

What do we have by way of the esoteric? There are the Freemasons, but their stuff is all on the Internet anyway and wandering around with rolled up trouser legs, a noose around your neck, while muttering strange oaths is hardly very imaginative; and on the other side there are people who see apparitions in tree trunks or hear voices from heaven.

Christian tradition is full of a sense of the numinous, a sense of sacredness, a sense of moments and places that are in some way other than ordinary life; such a sense seems to have disappeared. Even the new churches offer no such experience, they seem filled with wannabe rock musicians and preachers who think repeating propositions is a convincing form of argument. Perhaps the loss of the old liturgies, the Latin Mass, the Elizabethan Prayer book, represented a recognition that a sense of the sacred, a sense of difference, had gone.

There are few opportunities now of finding that which is different; few things equivalent to the sort of thinking that would make you dress up in baggy saffron trousers and go dancing down the street on a cold winter morning.