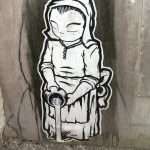 Attending an excellent seminar on child bereavement today, there was a sense of relief that such situations are not the stuff of everyday work. More often, there are moments in the parish that feel more like something from a BBC television sitcom.

In Dublin days when we lived opposite the parish church, I crossed the road one Saturday evening in order to leave things in the church for the morning. There was the sound of music on the evening breeze – Amazing Grace drifting though the air amongst the sounds of passing traffic. Getting closer, the organ music seemed to be coming from inside, which was strange because the building was in complete darkness.

A strong pinch of the left arm was in order and a pondering whether ghosts played Amazing Grace, don’t they always prefer something much more melodramatic?

Opening the vestry door, which was adjacent to the organ pump, there was some reassurance in the fact that the electric pump was turned on. Ghosts tend not to need electricity. I keyed the code into the pad of the alarm system that protects the vestry and listened.

What to do? I decided that I wanted to get to the switchboard for the church lights that was at the west door in order to throw all the switches. I went back to the vestry door and reset the alarm, the music stopped again.

Whoever was inside must have heard the sound of the alarm setting. There was a rustle of movement audible from behind the door where the organ pump is set.

Which way now? I pulled the door to and set off around the church, going around the east end and the south transept to give myself a clear view of the west door. There was no light at all from within the church.

I walked slowly to the west door, the outer iron gate that covered the door was pulled to. As I reached the door, it opened and a figure inside jumped back with fright.

One of the congregation had been practicing for an occasion at which he was playing. He had a headband flashlight he used for work and had found this sufficient to see to play the organ. He had been in the midst of Amazing Grace when he became convinced that there was an intruder in the vestry and that he had better investigate.

I suppose if it had been a BBC sitcom, one or the other of us would have been hit with a frying pan. I am glad he wasn’t playing the opening bars of Beethoven’s Fifth Symphony, I would have turned for home and never solved the mystery – and never had a silly story to recall at the end of a sombre day.