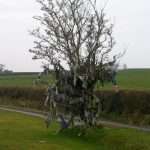 It’s one of those days when the stories and speculation far outweigh the verifiable, but maybe fiction has always have been more prevalent than fact; the neo-pagan notion of Imbolc, the Christian conjecture of Brigid of Kildare, much of both having no more substance than tales told to children about eating properly.

‘Eat up your vegetables there’, I had said.

‘Do you remember the story of the American President who didn’t like broccoli? He said his mother made him eat broccoli when he was a boy and when he was elected President he declared that he had been forced to eat broccoli as a child but was now the most powerful man in the world and wasn’t going to eat any more broccoli’.

There was uncertainty as to which President it had been and maybe doubt as to whether the story was true at all.

‘Eat up your carrots then, they will make you see in the dark’.

A lecturer in college days said the story about carrots had been invented by British intelligence during the Second World War. Wishing to disguise the effectiveness of their radar systems, they put the story around that service personnel were given lots of carrots in order that they would be able to spot enemy aircraft.

It seemed an unlikely story.

Where do stories come from? Someone must be the first originator of stories that seem to snowball in the telling. The church seemed extraordinarily adept in developing stories that would place its own interpretation on traditions or events. Some of the stories that circulate are patent nonsense – such as the claim that the ‘Twelve Days of Christmas’ was a Catholic Creed during the days of Protestant persecution (a claim that is presumably reversed where Protestants were the ones persecuted), others are a retrojection of Christian meanings upon much more ancient events.

The Church took the religious feasts and customs of ancient peoples and attempted to give them Christian meanings. Those whose traditions were appropriated often accepted a Christian veneer on their practices, but it was often no more than a veneer. Irish traditions of sacred places and magical powers continued to be believed and if the price of their continuation was their association with some saint or other, then it wasn’t too dear a price to pay.

On the alleged first day of the Celtic spring, 1st February, when the church remembers Saint Brigid of Kildare, the associations of the day with the ancient traditions of the coming season run much deeper than the remembrance of a woman monastic and the neo-pagan observance of Imbolc. The Christian originators of the more recent stories have a hard task to overcome traditions set deep in people’s psyche and the cycle of life.

The story of the carrots was probably around long before the invention of radar.