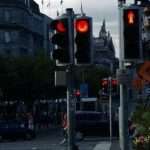 There is a story told of a foreign visitor arriving at Dublin Airport and taking a taxi to the city centre. The taxi moves quickly through the suburbs, passing lines of slower moving traffic. As it approaches a junction, the lights are turning from amber to red. Instead of slowing to a halt, the driver accelerates and goes through the junction at great speed.

The visitor is alarmed at such driving, but assumes that the driver had miscalculated and that he would have stopped if it had been safe to do so. The visitor begins to watch with anxiety as the next junction approaches. Again the light is changing to red and again the driver accelerates. The visitor makes an attempt at calmly pointing out that they have just crossed two red lights, but there is no response from the driver.

A third junction approaches, the light is red and there is adequate time to stop, but again they go through the junction. The objection is more voluble this time; the visitor suggests that he might prefer that the taxi might stop so that he could get out. ‘Don’t worry, mister, you’ll be fine’, says the driver.

The visitor looks ahead and is reassured by the sight of the traffic lights turning green. He sits back in his seat, only to be thrown forward sharply as the driver brakes hard and brings the taxi to a shuddering halt just short of the junction.

Recovering his breath, the visitor shouts in anger, ‘What do you think you are doing? The lights were green, why did you stop?’

The driver sits looking quite composed, as if nothing unusual had happened. He points to the street they would have crossed at the traffic lights, ‘Me brother drives down here’, he says.

The driver was not so unlike those in charge of Ireland who drove the nation like a taxi driver jumping traffic lights. Repeated amber lights, repeated suggestions that they slow down and take note of the traffic conditions were ignored. The national vehicle hurtled along until the government no longer had the power to direct it, let alone slow it down. Eventually the financial markets brought it to a halt with the sort of shuddering impact that one might expect from a speeding taxi hitting a stationary skip lorry. The international financial policemen were not at all pleased. Three of them, the Troika, the IMF, ECB and European Commission, came along and said, ‘Hello, hello, hello, what’s going on here then?’ and the Irish driver lost his license and was sacked from his job.

The new driver drove very slowly. The taxi was so weighed down by all the things that the Troika said it had to carry that it could hardly move and sometimes, when trying to go up hills, it would roll backwards. The passengers were not at all happy because the fares kept going up. Part way through journeys the driver would add extra things to the cost.

The driver was not so different from his predecessor though, just because Ireland had jumped red lights, he thought others would do so. He became very worried when there was a suggestion that the drivers from other countries might stop at the red lights and he told his passengers that there would be problems if the other drivers kept to the rules.

Of course, the problems come from those who drove the taxi too fast in the first place and crashed it, but the new driver is going to get the blame because, even with repairs, the taxi is now struggling to keep going.