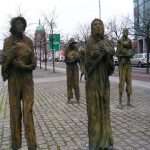 It is coming three years ago that I first encountered him. Stepping out the front door of where he lived, I turned and commented that the weather was bad; especially bad for the time of year.

‘It’s because of badness’, he said.

‘Sorry?’ Did I really hear him?

‘My father always told me that Ireland had done so many bad things that it would always be punished’.

No longer ago than this morning, he was repeating the view to a neighbour. ‘This bad weather is God’s judgement on Ireland for throwing out the English’.

The neighbour was quick to respond. ‘Then why are there floods in England?’

In the 21st Century there are still people who believe the country to be under some sort of national judgement. This is the stuff of the 1840s. Charles Trevelyan, Assistant Secretary at the British Treasury during the years of the famine wrote:

The Government resolve to endow in a permanent form the fountain-head of Popery in Ireland — the Royal (?) College of Maynooth. The Universal Protestantism of Great Britain and Ireland revolts, and with a million and a half voices deprecates the measure. This is of no avail. The miserable minority of men in power accomplish this infatuated purpose. It is done ; and in that very year, that very month, the land is smitten, the earth is blighted, famine begins, and is followed by plague, pestilence, blood! The work of encouragement to Popery proceeds ; the essentially Popish Board of Irish National Education has been doubly, trebly endowed and chartered ; the Popish priesthood are flattered, and unconstitutional, illegal titles are heaped upon the Hierarchy. A state endowment is lavishly offered to them, and, parallel with all this, pestilence grows and increases, famine spreads, civil war and rebellion stalk through Ireland.

It almost defies belief that anyone who claimed to believe in the preacher of the Sermon on the Mount could see the death of a million innocent people as a reasonable outcome of God being cross at the Government giving money to the college at Maynooth. What sort of God could so entirely miss the target of Nangle’s wrath and instead hit hapless men, women and children? What sort of God would let them die crossing the Atlantic? What sort of God would have allowed the infection and the fever of the ports they reached?

This is the logic of American fundamentalism; the sort of reasoning that argues God causes disasters and sends suffering to tens of thousands of poor people because he dislikes gay and lesbian people, or whatever other group that has offended fundamentalist sensibilities. If that was the case, why did God not hit those he disliked directly? It is perverse thinking. Perverse, but obviously persisting in the minds of some Irish people. Perverse, and immune to reason or logic.