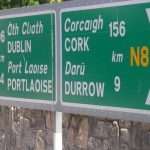 There were times in the ’80s and ’90s when there were French autoroutes that were more familiar than roads barely more than a hundred miles away. Perhaps the limited opportunities to go away meant heading for sunshine when the opportunity arose, perhaps it was just a reflection of the culture of our Protestant and unionist community in Northern Ireland to head for foreign destinations before heading for destinations deep within the Republic.

It was on a journey to Cork in 1994 that the cottage became a landmark. Driving from the east coast of Co Down in times before motorways crossed the country, lunch was taken in the Meath village of Slane before circuiting Dublin and heading west. It was the month of May, when rural Ireland it at its most beautiful. Beside a wide road that swept its way through an undulating landscape, that cottage kept a solitary vigil.

In years when every town and city changed, the white walls and black slate roof had a reassuring quality, reminders of an older, gentler, more settled Ireland.

Moving from the familiar suburbs of Dublin to places deep within counties that were no more names on a map during days in the North, there came the realization that the cottage that had been a sign of a different world was now somewhere passed on an almost daily basis. Uninhabited now, but still firm in its presence, still recalling small farms and flat capped men on bicycles, and women returning from Mass, and the scent of turf smoke, and the sound of church bells. It has been hard to pass it without wondering from where we had come and where we might be going.

The cottage might have endured for years to come, the roof looked secure, the paint was faded but the walls looked firm, but it is no more. Passing it this morning, only half of it remained, the rest was rubble. Perhaps its presence in the field was a nuisance to those growing crops on the land surrounding it, perhaps it was thought that it might be liable to the new property tax and there was a determination to remove any uncertainty; whatever the reason, it has gone, and with it a landmark filled with personal resonance.

Perhaps it does not matter, what is one more empty property in a country where three hundred thousand lie empty and where demolition will become a familiar phenomenon? Yet, the sight of the rubble brought a deep sadness, as though an old acquaintance had died. Perhaps its evocation of the 1990s provokes a sense of mortality, a facing of the reality of becoming of no more substance than the dust among the rubble.