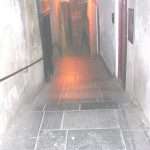 Billy Pilgrim, central character of Kurt Vonnegut’s ‘Slaughterhouse Five’, recalls imagined encounters with aliens from the planet of Tralfamadore. His family are embarrassed by the tales they regard as signs of psychiatric illness:

The most important thing I learned on Tralfamadore was that when a person dies he only appears to die. He is still very much alive in the past, so it is very silly for people to cry at his funeral. All moments, past, present and future, always have existed, always will exist. The Tralfamadorians can look at all the different moments just that way we can look at a stretch of the Rocky Mountains, for instance. They can see how permanent all the moments are, and they can look at any moment that interests them. It is just an illusion we have here on Earth that one moment follows another one, like beads on a string, and that once a moment is gone it is gone forever.

When a Tralfamadorian sees a corpse, all he thinks is that the dead person is in bad condition in the particular moment, but that the same person is just fine in plenty of other moments. Now, when I myself hear that somebody is dead, I simply shrug and say what the Tralfamadorians say about dead people, which is ‘So it goes.’

The Tralfamadorians may not exist, but their perception of time is not as strange as the character of Billy Pilgrim. Albert Einstein saw space and time as one; space-time was a continuum, complete in a moment. Writing to the family of Michele Besso, a friend who had died, Einstein wrote, ‘. . . for us physicists believe the separation between past, present, and future is only an illusion, although a convincing one’. Einstein may not have written that Besso was in a bad condition, but that he was fine in plenty of other moments, but if past, present and future are one, then he may have been happy to have concurred with the Tralfamadorian view of death.

If Einstein was right (and if he was right, he is still right and will be right), then his thought might not explain aliens, but it might explain other phenomena that people claim to have experienced. If all time happens at once, then feelings of déjà vu are logical, they are simply experiences we have had at points in our future, a future that happens simultaneously to our present and past. If Einstein was right, then ghosts are no more images from that simultaneous past, or even that simultaneous future.