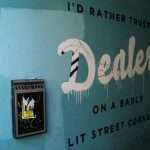 In less happy times in the North, news reports would occasionally carry stories of the death of people involved in paramilitary violence. If someone planting explosives blew himself up, there were those who would have expressed open delight, and others who would have felt a certain sense of satisfaction at the outcome.

The attitude that certain deaths are of no great consequence is one that has persisted long after the Troubles ended and in places far removed from the North. The news frequently carries news of the deaths of young men involved in gangland activities or involved in drugs dealing, as soon as the news reader says the deceased was known to Gardai, you can almost imagine the knowing nods at breakfast tables around the country.

Middle class people tend to be untouched by the gangland deaths in the way that many middle class people were insulated against much of the worst sectarianism in the North. Living there from 1983 until 1999 I never once encountered danger or threats, yet working class parishioners where I worked would have to contend with such realities every day. Perhaps if the middle classes were more affected, we would be less tolerant of violent crime.

Tomorrow’s Gospel reading is a warning to those who tacitly accept that some deaths are of no great consequence. In Saint Luke Chapter 13, Jesus makes it clear that he would not have tolerated an attitude which said that the casual deaths of those caught up in violence was something that might pass without comment, without regret. He warns his listeners that people involved in violence were not worse than other people.

His warning has made me think twice when I switch on the news and hear of the shooting of someone who has been involved in drugs dealing. Murder demeans a whole society, it devalues all life. No-one’s life is expendable.