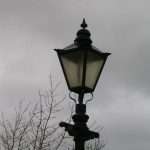 It seemed an odd comment from someone of a younger generation, what had there been about the past ten weeks that had made them seem to slip almost unnoticed? Perhaps it’s because it’s been so grey?

Days in March that are so overcast that car headlights are switched on at 4 pm are hardly conducive to a sense of spring being upon us, a sense of the land awakening, nature stirring herself from a months long slumber. Chill nights and a dearth of sunshine mean grass has hardly grown and the daffodils have hardly bloomed.

A friend in Dublin once complained that Irish winters were so much darker than in Ontario, her home for decades.  It had been a baffling comment, the 53 degrees North latitude of Dublin was not so different from the latitudes of that vast Canadian province.

‘How so?’ I had asked.  ‘The daylight hours in Dublin and Ontario are not that different’.

‘It’s the light’, she had replied.  ‘In Ontario the snows come and the skies clear and the sun shining on the snow fills everything with brilliant light.  Here there is greyness’.

Greyness, leaden skies, or, even worse, days when drizzle, mist, and bone chilling dampness create an illusion of the sky being on the ground, allow days to slip by unnoticed; nothing to distinguish one half illumined afternoon from the preceding or succeeding one. Following the example of October and November, it would be easy for January and February  to slip past one’s awareness to keep a profile so low that their presence passes unregistered.

But a moment can change things; imbue dullness with a radiance it seemed not to possess. In a landscape unchanged from the deadness of winter, in a traffic light delayed queue approaching construction work at a rural road junction, there was a sense of the darkness of which my friend had complained.

On Lyric FM, George Hamilton was going through his usual eclectic selection of Saturday morning music, when he played ‘Un bel di vedremo’, the aria from Puccini’s opera ‘Madame Butterfly’. Even to a musical ignoramus like myself, it is stuff that grabs the attention, that fills the air with a sense of something other than the mundaneness that surrounds. The March day looked different, a feeling of lightness permeated the moment.

Perhaps, in the absence of better weather, music might make time last longer.