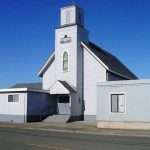 The Google search was in vain. I can find no reference to Pastor David Ingqvist’s Thanksgiving Sermon at Lake Wobegon Lutheran Church the year that he had nothing written except a Scripture text and the word ‘conclusion’.

It must be at least twenty years since Garrison Keillor told of that Thanksgiving in his ‘Prairie Home Companion’ programme on National Public Radio. It is a story as fresh in the memory as if heard yesterday, yet without searching through cardboard boxes for cassette tapes bought in Waterstone’s, the source of Keillor’s work in the days before the Internet, it is not possible to know which year.

Pastor Ingqvist has had a heavy workload in the days leading up to the Thursday of Thanksgiving and has not had time to prepare a sermon for an occasion important to his congregation. A conscientious man who takes seriously every aspect of his ministry, he feels guilty that he has had nothing prepared. Of course, like any seasoned pastor, he is able to assemble in his mind words appropriate for the occasion, but that doesn’t lessen his sense of having failed in his duties.

What makes things worse, in Keillor’s story, is that the congregation praise Ingqvist warmly for his words; suggest that it might be one of the best Thanksgiving sermons they have heard. ‘Well, I . . .’, he says, not quite knowing what to say.

What did David Ingqvist say that Thursday morning as his Lutheran congregation sat listening to his words while anticipating the turkey dinners that awaited in their Midwestern homes that November afternoon? Who knows? It never happened, but, if it had, what might have marked it out as a sermon that brought a response at the church door?

That Keillor’s story remains fresh in the memory is indicative of how, over the years, it has prompted reflection and questioning.

Of course, it raises questions about the nature of parish ministry: about getting so caught up with workaday duties that important things, like preparing for a major occasion, get neglected; about the perennial problem of clergy being bad at time management; about being so surrounded by parish stuff that one hasn’t the vision to be able to do more than to write a few words on a piece of card.

But it’s about more than that. Perhaps Pastor Ingvist’s sermon was so well received because, without anything written he spoke from the heart. Perhaps people saw the faith behind the words.

Preparing for a Lent service centred around John Chapter 3, Verses 14-17, I began to type a few words and then stopped. If I cannot speak on, ‘For God so loved the world, that he gave his only begotten Son, that whosoever believeth in him should not perish, but have everlasting life’, John 3:16,  without a script then what have I been talking about for most of my life? If I need more than the text, I could never be pastor at Lake Wobegon Lutheran.