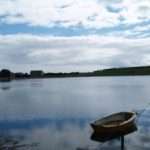 Ronald Blythe arrives just after nine o’clock each Monday morning. With no Saturday post here, the Church Times, dispatched from the East of England on a Thursday, takes four days to reach rural Ireland. Blythe’s back page Word from Wormingford column is always the first item to be read, (to be followed by the ‘Situations Vacant’ – pages of posts suitable for priests with the qualifications of Jesus, but more experience; or ‘house for duty’ adverts, suitable for clergy of means who can devote at least half of their time to working in parishes that can afford to offer only free accommodation in return for three day weeks).

It is the final week of February, rural Suffolk has arrived at springtime, and Blythe is travelling through a landscape that shapes stories and characters,

We ride through the distant view in Gainsborough’s Cornard Wood, and between the birthplaces of two hymns: ‘Hills of the North, rejoice!’ and ‘My song is love unknown’.

An embarrassment of riches. Not only a location immortalised by a major artist, but the place of authorship of two significant items in the corpus of hymnody. There seems hardly a corner of England without a house, a church, or a scene worthy of a blue plaque, or whatever it is that might now be used to indicate noteworthiness.

It was that England that I missed most when moving to Northern Ireland thirty years ago. The Troubles were only half over; the province was in a state of deep economic depression, and, to the eye of an English newcomer, there seemed little that was attractive. A suggestion that Hillsborough in Co Down was comparable to the beauty of English villages was unconvincing, I could have recited a string of places in my native Somerset that would have eclipsed the 19th Century Ulster town, Dunster being at the top of the list.

It was a historian friend in North Down who taught me that beauty could take forms other than that manifest in paintings and music, that medieval buildings were only one possible form of attractiveness in a place. He conceded that Ireland had little by way of vernacular architecture, he accepted that Irish painters and musicians had not been major world figures, but he believed there was beauty, and international significance, in the oral and written culture that could be readily found if one sought it, and he had no need to point out the landscapes unmarred by the urbanisation that had enclosed much of rural England.

My friend would lend me volumes of Seamus Heaney poems, each of which would prompt me to go to one of Belfast’s two city centre bookshops to buy my own copy. To read Heaney’s poem ‘The Peninsula’, and to go in heart and mind to the shores of the Ards, is to find a land as rich as Blythe’s Suffolk.