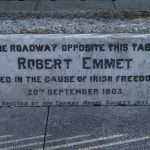 Bullying came up as a subject in the classroom this morning, specifically the subject of name-calling. The class listed the usual things for which people might be called names, then one said, ‘my sisters get called ‘orange’ at their school’.

The remark caught me out. ‘Orange? Why would they call your sisters ‘orange’?

‘Because everyone else is Catholic and they are Protestants’.

‘But they are not Orange’.

Not only were they not Orange, it would be hard to imagine any Protestants less ‘orange’ than the girl’s family. Yet ninety years on from the foundation of the State, there are still people who would wish to label Protestants as not Irish, as outsiders, as people to be associated with all the images associated with Orangeism by those who watch Irish news programmes.

To be fair, the classmates of the girls’ sister are not so unusual in their perception. Undergoing surgery for the removal of a lipoma in a Dublin private hospital five years ago, a bizarre conversation had taken place.

The surgery had taken longer than expected; forty-five minutes while the surgeon dug a lump of fatty tissue he described as being ‘the size of a saucer’ out of my upper back. It had required a second local anaesthetic to be administered. The time had been shortened by the banter. The surgeon complaining that he had only gone into the trade because he thought the nurses would be good looking, and they responding that the good looking nurses were all with the good looking doctors. There had been a discourse on neurosurgeons being poseurs. I told him that they all frightened me, because most people I knew who had died had had some contact with a doctor, and that the correlation between contact with a doctor and dying seemed disturbingly high.

Getting on to what I did for a living, he commented that there seemed to be an awful lot of red blood across my back, shouldn’t Protestant blood be orange?

‘No’, said one of the nurses, ‘Protestant blood around here is blue’.

‘Not mine’, I said, slightly concerned about the reference to a lot of blood, ‘my family were Labour Party through and through – our blood is deepest red’.

Never having had surgery before, I had wondered if such conversations were typical. The surgeon then said that it might have been better to have had a general anaesthetic, but having started the job, he might as well finish.

More seriously, we talked about sectarianism and the North. ‘I wasn’t a Protestant until I moved to the North in ’83’.

‘What do you mean”, said the surgeon, “you weren’t a Protestant?”

“I wasn’t an anything’, I said, ‘I’m English, I lived in England. No-one ever asked; no-one cared what you were’.

One of the nurses, a Belfast woman joined in, ‘No-one asks in the North. They just work it out. They ask you what school you went to and other stuff”.

She was right. The first indicator is a person’s name. Sharing a Christian name with the arch-protestant himself, my label was always quickly applied. A friend who comes from an evangelical Christian background has an Irish name more typically found in the Roman Catholic community, he has gone through life with people making assumptions. He says he knows he has lost work at times because of his name.

The banter had been good for exploring prejudices, for laughing about perceptions, but sometimes a world without a need for banter seems attractive. I had winced as he hit muscle with whatever implement he was using. ‘Sometimes’, I had thought, ‘I just want to be a person. I don’t want to be a Protestant’.