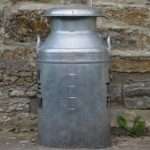 High cholesterol has dictated eating porridge for breakfast, but the packet of Corn Flakes on the kitchen worktop this morning looked tempting. Corn Flakes were the breakfast choice in childhood days.

Do you remember those days when you would cut figures out of cardboard, and hang accessories on them with tabs, and think that this was something great to have? Perhaps it was much more a girl’s thing, cutting out models from comics and dressing them in different outfits, but there must, at one time, have been a market amongst boys.

The makers of Kellogg’s Corn Flakes obviously believed that there was interest amongst small boys in cutting things out of card, because in the late 1960s they ran a series of pictures of knights in armour on the backs of Corn Flakes packets. The knight was besuited in his battle armour and dextrous fingers were meant to cut out weapons to be attached to the figure with folding tabs. A shield for the left arm, a belt and sword for the waist, a lance to attach to the right hand; strips of card below the figure could be cut out and inserted at right angles into slits at the bottom of the figure so that he would stand up.

How many thousands of these boxes did they print?

Probably a large number. Own brands would have been rare in those days and there was (and still is) only one brand of corn flakes that tasted like Kellogg’s.

Despite the huge volumes of each figure that must have been printed; there seemed to be one of the knights that was very hard to find. One could have any number of Black Princes, but one of the lesser known characters was very rare. He was to appear on a summer’s morning away from home

Staying with my grandparents on their farm was always a special treat. Breakfast was a dietician’s nightmare; cereal was immersed in milk scooped, still warm, from the top of the churn. A number of Jersey cows added to the richness of the milk from the Friesians, and along with the warm fresh milk, there would have been a pink Tupperware bowl from which to spoon cream over the top of the plentiful sugar that had already been sprinkled on the corn flakes.

One summer’s morning, having poured a mountain of corn flakes into the bowl, with the necessary amounts of milk, sugar and cream. I sat back on the wooden chair, the bright light of the August day coming through the kitchen window behind me. I turned the corn flakes box to read the back (do people still read cereal packets?) and there it was – the missing knight.

The delight of that moment still remains. Who he was, I have no idea. Greens and browns on his armour remain in the memory, but a search of the web provided no clues. Kellogg’s seem not to have an archive of old corn flakes boxes, perhaps there would be little demand for such information.

There have been many times since when I would have wished to have recaptured such a moment – such an unalloyed innocent delight in something so commonplace and simple. Porridge simply hasn’t a comparable charm.