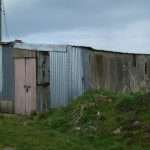 Perhaps Facebook will start billing users for the amount of space on their servers filled with photographs, or perhaps they will start using them without asking. Would that be such a bad thing? Millions of strange and unusual images that might be more interesting than the mainstream media might suddenly become available.

The number of images in my own albums is now approaching 5,000, the majority of which have been taken in the past four years; maybe a thousand or so a year. A digital camera makes possible an inclination to take pictures of the commonplace, an inclination that was strange and costly in the days of rolls of film that had to be developed and printed. Taking pictures of ordinary, everyday things was something to generally be avoided when the processing cost a lot of money, though looking back through pictures taken in the 1980s, there was still some pretty odd stuff among the holiday and the family snaps, signposts and gates being common.

Ulster maritime historian Michael McCaughan was a good friend and a brilliant amateur photographer. He always said that if he couldn’t spend time taking photographs, the thing he wanted to do most in the world was to be a maritime historian. Michael could take the most dull and ordinary of scenes and find interest and texture and colour, causing one to pause and contemplate images that would not ordinarily register their presence, let alone prompt a second glance.

There are moments when a picture will prompt a negative reaction, ‘why did you take a picture of a shed?’

The picture had been taken in a moment this afternoon as we passed down a country road – the shades of metallic grey and pinkish hue of the doors had made it seem interesting.

Looking at it later, the shed seemed to have a series of stories it might have told and a string of questions it might have asked. Its evolution as a building seemed to have covered decades – concrete, corrugated asbestos, corrugated iron, galvanised sheets, a metal window frame covered in plastic, plywood doors – how many different times had there been work on the building?

And what purpose did it serve? It was a distance from any other building around and did not seem to have any agricultural use.

Most intriguing of all were the cables running to it: why would a shed need cables?

Of course, the shed was not going to answer the questions and returning to make inquiry would arouse suspicion, regarding one’s sanity, if nothing else. But without a picture, I might not otherwise have wasted so much time.