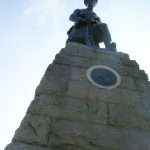 Three more British soldiers dead in Afghanistan; 444 since 2001 – and to what end? Forces are to be withdrawn in 2014 and Afghanistan will resume its usual history. In a generation the presence of the soldiers will be all but forgotten, and what will have been achieved?

Prior to the Soviet invasion of Afghanistan in 1979, it was said that Soviet agents scoured bookshops on the Charing Cross Road in London in a search for works on the British invasion of the country a century previously. It seemed absurd that a mechanised campaign with aerial support would have anything to learn from an ill fated campaign in 1878, but lessons were not learned and the Soviets were left to withdraw in ignominy.

Perhaps those responsible for the 2001 invasion would have derived little that was useful from antiquarian books, 1878 belonged to a different world, but lessons might have been learned from the Soviet experience – the essential one being that the geography of the country and the physical resilience of its people make in unconquerable.

Analysts talk of a ruling elite in Kabul that is corrupt and vast rural areas that are beyond government control. The New York Times on Monday reported that millions of dollars in cash have regularly been paid to the office of the Afghan president stuffed into ‘suitcases, backpacks and, on occasion, plastic shopping bags’, and comments:

. . . there is little evidence that the payments bought the influence the C.I.A. sought. Instead, some American officials said, the cash has fueled corruption and empowered warlords, undermining Washington’s exit strategy from Afghanistan.

“The biggest source of corruption in Afghanistan,” one American official said, “was the United States.”

It is strange to recall the ostensible reason for the invasion, the search for Osama Bin Laden, and then to reflect on the huge cost in lives and materials of the attempts at state building. Ultimately the war, like all wars, is part of a futile tradition that will continue to find its expression in other times and other places.

E.L. Doctorow’s brilliant novel from the American civil war The March, telling the story of the victorious advance of General Grant’s army, becomes very philosophical towards the end.

‘Though this march is done, and well accomplished, I think of it now, God help me, with longing-not for its blood and death but for the bestowal of meaning to the very ground trod upon, how it made every field and swamp and river and road into something of moral consequence, whereas now, as the march dissolves so does the mean­ing, the army strewing itself into the isolated intentions of diffuse private life, and the terrain thereby left blank and also diffuse, and in­effable, a thing once again, and victoriously, without reason, and, whether diurnally lit and darkened, or sere or fruitful, or raging or calm, completely insensible and without any purpose of its own.

And why is Grant so solemn today upon our great achievement, except he knows this unmeaning inhuman planet will need our war­ring imprint to give it value, and that our civil war, the devastating manufacture of the bones of our sons, is but a war after a war, a war before a war’.

A war after a war, a war before a war – is this what nations need to have a sense of meaning? Do we need war to impart value to our planet? It is a bleak thought.