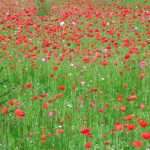 Sitting in with a friend going through a sad time, and then putting the final touches to plans for the annual pilgrimage to the Western Front, a memory came of such a visit to France and Belgium some years ago. A lovely girl had led our party on the tour through a memorial park; ‘a fine lass’ observed one companion, and him a generation older than me.

At the end of her talk there was a pause: what did one say in response to a tale of appalling tragedy? As the group slowly dispersed, feeling the need to be jolly, I asked the girl about her work back in Canada during the summer and how it was working for her employer. We laughed and smiled and I wandered down the path.

Our tour guide lingered with her a moment longer and then caught up. ‘We were laughing – you went into padre mode!’.

‘That’s OK. It’s your job; you’re there to cheer people up’.

There was no conscious decision to do any such thing; maybe it was a defence mechanism – deal with sadness by being jolly.

Jollity and sadness seem to go together. The comic and the tragic are never far apart.

Perhaps it’s the genius of British comedy to be able to express the saddest moments and most profound emotions in a way that we can understand and share.

The closing moments of the final Blackadder, when Captain Blackadder and his men go ‘over the top’ and fall one by one under a hail of fire, as the war scene slowly fades to be replaced by a field of poppies, is one of the most moving moments on television. Lines from those closing scenes were repeated on numerous occasions in the journey along the Western Front that year.

David Jason shares Rowan Atkinson’s genius in being able to express the profoundly tragic as well as the deeply comic. Del Boy in Only Fools and Horses is selfish and superficial and completely untrustworthy, but the character was redeemed for me in the episode when Grandad has died. Del is his usual buoyant, ebullient self, taking everything in his stride. Granddad was old, old people die; what should Del Boy feel about it? When Rodney challenges him, he breaks down; he hasn’t even begun to cope.

Clergy are supposed to have that Del Boy personality, always smiling, always positive, always on top of things. We don’t even have anyone like Rodney to ask the awkward questions. Sometimes behind the smiles there is a deep sadness, but, like Edmond Blackadder and Derek Trotter, we carry on, go into the ‘padre mode’. A conscious defence, maybe? Or maybe because it is the only way we know.

Perhaps today was such a day.