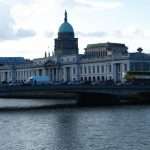 The debate rumbles on over the failure of the Irish government to secure an agreement with the public sector trade unions. At the core of the argument is the government wish to cut €300 million from its pay bill (a rather trivial sum compared to what it paid to subvent the gamblers who made losses with Anglo Irish Bank, but no matter). There seems to be a persistence of a blinkered attitude towards revenue raising.

When we are desperate for money for our health system, how much does our gambling industry contribute? Wouldn’t punters be paying a levy on their bets in the same way that everyone else has to pay tax on the things they buy?

In 2008, finance minister Brain Lenihan increased the horse race betting levy from 1% to 2% in the Budget, (it had been 10% before a predecessor, Charlie McCreevy got at it). That 2% levy, was said to generate an additional €40 million in a year, and was the sole contribution of the gambling industry to government revenues. Who says that? Not me, but an article on The Lawyer website, hardly a hotbed of political radicalism

As Irish economic growth slows and traditional tax revenues diminish, the government’s strongest incentive to legislate could be trying to boost state revenue by taxing an industry believed to turn over in excess of e3bn (£2.36bn) every year.

It is curious that, in a country that experienced unprecedented growth during the 1990s, legislation regulating Ireland’s gambling industry dates back to 1931 and 1956. In tax terms, the only duty currently imposed is a 1 per cent betting duty for off-course betting with no specific gaming duty in place. The Irish government has failed to introduce modern legislation to deal with developments in the industry, particularly in relation to online gambling. By not imposing a gambling tax or taking steps to regulate gambling, the government has failed to capitalise on potentially significant tax revenue from the industry.

In the five years since then, there has been little material change in the situation. In 2012, finance minister Michael Noonan introduced legislation applying the levy to all bookmakers and betting exchanges, whether in registered premises or online, but there has never been a suggestion that it be raised to a level approaching that paid prior to McCreevy’s intervention. In a country where hard pressed people pay 23% VAT on essential items, would it be so hard to expect the gamblers to make a decent contribution?

A 10% levy on a €3 billion industry would generate €300 million a year, the very amount needed by the government to close the gap in the public sector pay bill.