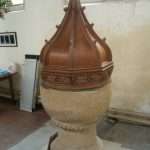 ‘Therefore go and make disciples of all nations, baptizing them in the name of the Father and of the Son and of the Holy Spirit’. John 28:19

Does being baptized make one a Christian?

While wishing to maintain the practice of infant baptism, a practice dating back to the days of the early church, I was always uneasy with the idea that baptism automatically made one a Christian. The uneasiness didn’t come from anything theological, it came from studying history. Adolf Hitler and Josef Stalin, the two worst tyrants in the history of the 20th Century, were both baptized—did that make them Christians? Did a religious ceremony held when they were babies excuse them from being held responsible for the monstrous acts they committed as adults and guarantee them a place in heaven? If being a Christian required nothing more than the pouring of water on one’s head, then Christianity seemed an odd sort of faith.

When we look at the Bible, baptism does not begin with the church, it begins with the Jewish people who used it as a sign of washing away their past and beginning anew; it was a sign of repentance, of a desire to get rid of the impurities of one’s former life and begin anew. The people who went to the Jordan to be baptized by John went for a baptism of penitence. It was not a baptism that was undertaken once and for all, but rather was one that might be repeated if the penitent person felt it was necessary.

John the Baptist is baptizing people who have sinned and want to say sorry and start again and that is why, when Jesus comes to the Jordan for baptism, we read in Saint Matthew Chapter 3 Verse 14, John tried to deter him, saying, ‘I need to be baptized by you, and do you come to me?’ Jesus understands John’s concern, and answers him, ‘Let it be so now; for it is proper for us in this way to fulfill all righteousness’. John has recognized that something begun within his community as a sign of repentance is an inadequate response to Jesus. Jesus agrees, ‘let it be so now’.

Baptism in the early days of the church is a move away from being the penitential washing of John the Baptist’s time, though part of its symbolism is still the washing away of sins, to being a sign of sharing in the death and resurrection of Jesus. In Romans Chapter 6 Verse 3-4 Saint Paul writes, ‘don’t you know that all of us who were baptized into Christ Jesus were baptized into his death? We were therefore buried with him through baptism into death in order that, just as Christ was raised from the dead through the glory of the Father, we too may live a new life’.

Baptism becomes a dying and rising with Jesus and it also becomes a moment when people receive the Holy Spirit. Peter declares to the crowd in Acts Chapter 2 Verse 38, ‘Repent and be baptized, every one of you, in the name of Jesus Christ for the forgiveness of your sins. And you will receive the gift of the Holy Spirit’.

Baptism in the Acts of the Apostles follows a person declaring their trust in Jesus. In Acts Chapter 2 Verse 41 we see baptism being administered in response to faith, ‘Those who accepted his message were baptized, and about three thousand were added to their number that day’.

Faith for Jewish people was something that had a community dimension, it wasn’t individualistic, faith was about one’s whole household. We read in Joshua Chapter 24 Verse 15, Joshua declaring faith in God, but not just on behalf of himself. He says to the people, ‘But if serving the Lord seems undesirable to you, then choose for yourselves this day whom you will serve, whether the gods your ancestors served beyond the Euphrates, or the gods of the Amorites, in whose land you are living. But as for me and my household, we will serve the Lord’.

We see baptism as a moment for a whole family, for a whole household in Acts Chapter 16 Verses 14-15. Lydia we are told in Verse 14, ‘was a worshipper of God. The Lord opened her heart to respond to Paul’s message’. Her faith leads to the baptism of her household. Verse 15 tells us ‘When she and the members of her household were baptized, she invited us to her home. ‘If you consider me a believer in the Lord,’ she said, ‘come and stay at my house.’ And she persuaded us.’
Building on the custom of baptizing whole families where the Christian faith was accepted by the parents, it became the discipline of the church to baptize children. Infant baptism was followed by confirmation, initially at a very early age, but later when people reached an age at which they could make a declaration of faith for themselves. Confirmation owed its origins to Acts Chapter 8 Verses 15-17, ‘When they arrived, they prayed for the new believers there that they might receive the Holy Spirit, because the Holy Spirit had not yet come on any of them; they had simply been baptized in the name of the Lord Jesus. Then Peter and John placed their hands on them, and they received the Holy Spirit’.

The Sixteenth Century Reformation brought challenges to the practice of baptism as it had developed in the church. Anabaptists became so called because the main churches saw them as baptizing again. The people thus described rejected the name, for them infant baptism was not valid, the baptism of adult believers was the only valid baptism. Balthasar Hubmaier, one of their leaders, wrote, ‘I have never taught Anabaptism. . . . But the right baptism of Christ, which is preceded by teaching and oral confession of faith, I teach, and say that infant baptism is a robbery of the right baptism of Christ’.

Believers’ baptism became the practice of most evangelical churches and there are times when the case for it seems particularly strong, when one looks at history, when one looks at the trivialization of baptism by many who bring children to receive it, the days of Lydia and her household seem very remote.

If the church is to continue the tradition of infant baptism that goes back to the days of the early church, it needs to take God’s grace seriously. Baptism is a sacrament: the Anglican catechism says, ‘The sacraments are outward and visible signs of inward and spiritual grace, given by Christ as sure and certain means by which we receive that grace’. Our lack of discipline has made that grace into something cheap.

Dietrich Bonhoeffer, the German pastor executed by the Nazis in World War II, wrote a book called ‘The Cost of Discipleship’. Bonhoeffer talks about ’cheap grace’.

Bonhoeffer contrasts the ‘cheap grace’, which tends to be what we offer through our practice of baptism, with the costly grace offered by Jesus, ‘costly grace confronts us as a gracious call to follow Jesus, it comes as a word of forgiveness to the broken spirit and the contrite heart. It is costly because it compels a man to submit to the yoke of Christ and follow him; it is grace because Jesus says: ‘My yoke is easy and my burden is light’.

The power of baptism depends upon the acceptance of ‘inward and spiritual grace’, whether at the moment of baptism or years later. Without such acceptance, its power is lost. Without acceptance of God’s grace, one is not a Christian.