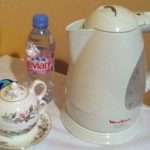 Irene was a formidable lady. Her house was at the end of a long private lane, the dwelling house of a former farm the land of which had been absorbed into a larger neighbouring farm. Despite its sometimes lonely feel, it was home to Irene and was a warm and inviting place. There was always a fire in the hearth and always tea in a china cup with slabs of fruit cake. Her big black Labrador would greet visitors at the kitchen door and listen to conversation companionably, lying on the fireside rug.

Irene was blessed with great health. On her 90th birthday I called and offered her congratulations. ‘There aren’t many that can do this at my age’, she said and bent double, legs quite straight, and placed both hands flat on the floor.

Once I found that she had been taken to hospital with a broken leg. ‘What happened?’ I asked as she lay in the ward.

‘I was dusting the stairs and thought I had reached the bottom, but there was still another stair and I fell when I stepped back.’

‘Did you have your panic button with you?’

‘Oh no. It was in the kitchen cabinet. I keep it there so that I know where it is’.

While perhaps not wise in matters of communication, Irene had great wisdom in other matters.

Irene was fond of her kitchen, it was a place where she found peace of mind. There were times when sad moments from the past would come back to haunt her. Waking from sleep at two or three in the morning, painful times would replay themselves in her mind, again and again. ‘I just get up and come down and make myself a cup of tea and sit at the table and drink it and I feel better’.

Waking at four o’clock this morning, there was a lightness in the cloud covered sky, but a darkness in the mind. Stuff from years ago, random events, annoying moments, reran themselves. There is nothing about which to feel gloomy, but that did not inhibit the train of images that made its progress through the consciousness. Perhaps everyone has such moments; the dark waiting to stage an ambush in the early hours of the morning.

Was a slab of fruit cake permissible at such an hour? When you are ninety years old, why not?

The black Labrador would be delighted to have such unexpected company, and the world would look once more manageable.