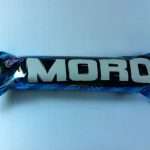 Lunch was bananas and chocolate. A Moro bar was the third choice out of three; it was a first time experience and didn’t taste bad, though may have benefited from not being in a car on a sunny May day. Perhaps Moro bars sell very well, but, if they do so, it is in the face of massive competition; go to a garage or newsagent these days and the checkout operator peeps out from terraced rows of chocolate bars and packets of sweets.

There seems an exponential in confectionery. Perhaps a small village in Somerset was not typical of the sweet market in the 1960s, but there seemed only a small fraction of what is now available. The village shop had sweets in jars, lemon bonbons being the best option; the post office sold chews, as cheaply as eight a penny; and the mobile shop that visited the village on a Monday evening was the only source of sherbet fountains. If the temptation to buy ice cream could be withstood, the Wall’s van that did a round at teatime on a Sunday sold peanut brittle – a wonderful combination of toffee and nuts that could cause irreparable damage to one’s teeth: even the worthy and dull programmes that filled the television schedules on a Sunday could be bearable if one was preoccupied with eating a bar of peanut brittle without losing a filling.

It is odd, there must have been things we would have liked but could not afford, our handful of pennies dictating our selection, but if there were, they do not remain in the memory. Maybe the higher priced items were all bars of chocolate, useless to a boy on a bicycle who wanted something he could stuff into his pocket; maybe high priced confectionery was not intended to appeal to boys on bicycles, the manufacturers knowing we hadn’t money to pay for it.

But how did we know what to buy? Few advertisements remain in the memory – Cadbury’s Fruit and Nutcases, roaring Lion bars, Polos with holes in the middle, Mars bars that helped you work, rest and play, Maltesers that melted in your mouth and not in your hand, Opal Fruits made to make your mouth water – they were hardly the stuff to capture a child’s imagination. I never ever saw an advert for sherbet fountains on lemon bonbons, but still bought them.

Perhaps Moro bars are promoted with an extensive advertising campaign, perhaps they have slogans and jingles, perhaps I have missed something. The world of confectionery seems a mystery. Maybe I’ll buy another Moro bar to investigate its attraction.