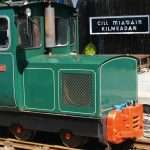 An excellent day that included riding on the Waterford and Suir Valley Railway. Travelling along the banks of the wide Suir in the warmth of June sunshine, there was again cause to ask what it was about railways that created such a sense of inner well-being.

Why have railways always had a special fascination, even for someone who knows nothing about engines or engineering?Maybe they represent an ordered world, a safe world structured by timetables. Maybe they were from a world where people were still courteous and the country had not been franchised out.

Why have railways had a peculiar capacity to draw together people of diverse backgrounds and diverse viewpoints? Among clergy, people who might antagonise each other on almost every other imaginable subject will concur on the details of a particular locomotive or in their recollection of a particular steam railway.

Why is it my ambition in retirement to visit all 180 Somerset stations? An intention I once confessed to the lady of the house.

Being honest, there aren’t 180 stations in Somerset; there are only thirty and eleven of those are on a railway preservation trust’s line, but there once were. The three Somerset counties – Somerset, North Somerset and Bath and North East Somerset – had 180 stations on a web of different lines. Many of them were never viable, built distant from towns and villages in places where the population was sparse, but why the fascination with forgotten places?

I have often wondered at colleagues who developed such passionate interests in unlikely things – steam railways, ancient buildings, obscure books, esoteric scholarship – but perhaps there is a thread running through it. Perhaps it is about investing one’s feelings in things that are impersonal and even remote.

Perhaps it is a way of coping with the pain of some the stuff that has to be dealt with and with the isolation that comes from never ever being able to share things heard. A 1940s steam locomotive or the workings of a semaphore signalling system represent stuff that is going on out there, stuff that can’t hurt you.

Perhaps the fascination is about not so much an interest in the culture of others as an escape from self.