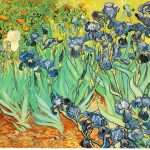 There are irises growing at the roadside at Beladd; great purple flag irises. They must have been planted there, it is not in their character just to appear.

Once, I might have made a stab at their name. Well, to be honest, I might have reeled off a string of varieties and those at Beladd might or might not have been among those named. I was more familiar with iris leaves than with iris flowers. By the time the summer job began, the flowers had long since wilted and died.

Cutting irises was among the jobs summer casual workers were allowed to perform. The foreman would arrive with the quantity of each variety required to make up the orders received at shows and by post and we would be allowed to cut individual rhizomes from the clumps that grew in the long rows of the nursery fields. Occasionally, the orders would become confused and plants cut from different varieties might end up in the same sack. Without flowers, they looked identical and the foreman would turn puce and mutter expletives as he emptied the now useless plants onto the rubbish heap.

It seemed always a waste that plants that might have sold for up to a pound each – more than we were paid in an hour – should be so casually thrown away. The foreman had no objection to us taking plants from the rubbish heap and thirty-five years later, unknown, unnamed varieties still grow in the gardens of my parents’ and grandparents’ houses.

The cut irises were wrapped in peat and damp newspaper to keep them fresh and put in Jiffy bags to be posted to customers across the country. If the foreman was in a good mood, he might allow you the odd afternoon working in the packing shed rather than out in the fields, but such a privilege was not often extended to casual staff.

Despite our best efforts, sometimes plants would still be not what people ordered, or might not grow as they had expected, or might not grow at all. It seemed odd that people would expect anything horticultural to be so predictable, but if what grew in their garden did not match what appeared in the catalogue, some of them would become very irritable.

The worst customers were those who would arrive at the nursery with their complaint, intent upon imparting a piece of their mind to the nurseryman responsible for the fact that their purple irises were white, or their flag irises are dwarfs, or that the irises they had received had not grown at all. Their mistake was to assume they could outwit a wily old nurseryman.

Standing in the packing shed on a rare afternoon, the foreman spied through the dirty glass a woman crossing the yard from the office, a determined look on her face. ‘Here comes trouble’, he muttered.

The woman opened the door, ‘I want to speak to the foreman. I was told I would find him here’.

Without flinching, he said. ‘I’m terribly sorry, madam, he’s not available this afternoon. May I give him a message?’

It is all now a long time ago, now, in a galaxy far away, days as brief as the flowering of an iris.