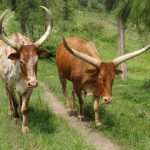 Personality and polymath, Clarissa Dickson Wright shared thoughts in last week’s edition of the Church Times. Her comment on happiness was one that would find resonance in the community here:

I’m happiest out of doors, usually in autumn; or looking at the acid- green of leaves in early spring, or winter, because I have hay fever in summer. I always remember being out hunting one day when it was bright but trying to sleet, and this old farmer, lolloping along on a horse, said to me: “Ye canna’ be vexed on a day like this.”

‘Ye canna be vexed on a day like this’, it might not be the best of days, but, if it wasn’t a day to vex you, it was a good day. It was a comment that illuminated a conversation that had seemed odd.

Stepping out of pouring rain into the dryness of a local supermarket, I had met the shop owner’s uncle, dressed in wet weather gear, pushing his bike between the dairy counter and the cakes. He greeted me, ‘Ian, a fine evening, thank God’.

‘Ah, a fine evening, though’, he smiled.

Recounting the conversation to a local farmer the following day, he said. ‘Of course it was a fine evening, wasn’t the rain soft and warm instead of heavy and cold?’

Our culture has become one that dwells on the vexatious. Phone-ins have become the staple diet of speech-based radio; to sustain interest even trivial concerns become magnified into matters of principle. Social media seem often a platform for sharing annoyances that in former times would have passed unremarked. If one’s perception of the world was governed only by images and words received electronically, then there would be a feeling that the world was a place filled with a palpable sense of frustration and anger.

The content of an email from an African friend, who had spent months in Ireland on agricultural training and experience, might have been something vexing. The demonstration farm he is to manage, a place where farmers can come to learn and discuss farming techniques, was not well stocked, a handful of cattle and a dozen goats, but he returned to discover that, during his absence, all of the few livestock the farm possessed had died from disease. I would have felt severely vexed, yet he concluded, ‘It is very sad that we shall start again quite on zero, but God is with us’. It would be good to have such confidence in all things turning out well.

‘Ye canna’ be vexed on a day like this’, said the old farmer. There is not, really, much to be vexed about, even if it is lashing rain.