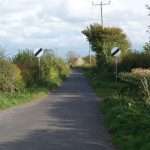 The favoured cousins had arrived on a Sunday night, from whence they came and where they might be going is long lost in the mists of memory. Come Monday morning, everyone had woken early, June sunshine illuminating every corner. The agenda for the day was clear, we would be going to our village primary school, they would travel onward to their destination. Yet, for just half an hour, there was time that was our own. In times long before electronic diversions, the options were limited. We would go for a walk.

Walking before school was  strange, we walked to school, to walk before walking would not have been contemplated on an ordinary day. The walk was not long, it took us no further than the windmill at the end of the road, but in those yards of tarmac there was a magic, a lightness, a difference.

The six week summer break from school was still probably a month distant, but there was a holiday mood. The pasture land around us took on a vivid greenness, the hedgerows filled with life and colour. In the pantry window of the windmill cottage sat two pickling jars; in the brilliance of that morning, they assumed an unlikely mystique, symbols of a world filled with potential.

What words were said on that distant day? Who knows? Childish chatter, inconsequential, except that it would have confirmed the reality of the experience; that it was really Monday morning, that it really was a schoolday, and that, despite such cause for complaint, our cousins were with us and we could smile at the world.

Of course, the moment passed quickly, as half hours tend to do, and we went to our school, and they went on their way, and the world resumed its mundane ways; except that it was changed. The world had become a place in which ordinariness might suddenly be transfigured, in which the dull and the routine might momentarily be infused with a sense of excitement and joy.

At 7.45, short of milk and bread, I pulled closed the door of the big eighteen century house that serves as a family home. The yard was filled with contractor’s machinery for resurfacing the driveways of the neighbouring cathedral, the unmistakable and evocative aroma of tar. The short hill toward the town is named ‘Coach Road’, it is along time since any cleric rode up it on horseback. Pinks and purples in the flower beds seemed appropriately ecclesiastical. The sun shone and, for a moment, I was walking with my cousins again.