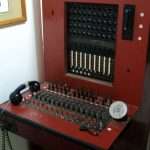 The router had to be re-booted, the desktop computer and Internet radio connected, through it, to the outside world had ceased to receive data. The process will probably be repeated two or three times during the course of the evening – pressing the button on the back of the black box and waiting, for what seems an interminable length of time if in the middle of some online order, for three green lights to be illuminated.

Phone calls to Eircom about the poorness of the service are of no avail. Dial the number and someone in a call centre will answer and suggest such things as that the cable might not be plugged in. The service they provide to much of rural Ireland is poor and even basic broadband services are unavailable in some rural communities.

It is not as though it is a simple matter of switching to one of the mobile telephone companies. There are still places with no coverage at all, and while there is talk of 4G services, 3G can be difficult to find. While companies publish figures claiming coverage of nearly 100%, that coverage relates to population rather than land area. Covering the Dublin, Cork and Limerick areas can easily justify a claim of having a coverage of more than 50%.

But why would a company worry about improving the service? In business for profit, they will focus on those places where the returns are greatest; less populated places mean a lesser potential for sales, and a lesser opportunity for making money. If the connection fails persistently, it is not a great problem to the company, there is little alternative available to those who would seek another service provider and, should one be found and a customer decide to move, the loss of revenue to the company is hardly going to be significant.

Technology is vaunted as the solution to the problems of many areas of the developing world, but will their experience differ from that of rural Ireland? If a good Internet connection is difficult in places here, imagine what the prospects are in rural Africa where many communities suffer from inefficient bureaucracy, corrupt officials, and a restricted access to markets. Technology offers advantages when it combines with access to all the other resources, which means that those already with access to those resources are best positioned to benefit from technological development. In business, those most likely to benefit from the development of the Internet are those with access to the premises, the transport and the finance needed for their business to succeed – and those most likely to benefit in business are likely to be those who ensure they have the best access to the Internet – a fulfilment of the maxim, to he who has shall be given.

Rural Ireland and rural Africa differ immensely in wealth, but have a communication problem in common.