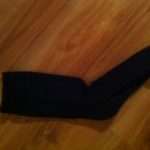 The disappearance of socks has been particularly severe in recent months. Of one pack of five pairs bought before Christmas, but one sock now remains. What does one do with a single grey sock, bereft at the loss of nine of its erstwhile companions? The days when it might have been pressed into service as material for a glove puppet are long past. Perhaps, one day, its onetime friends will come back, from who knows where?

The five pairs had been bought to alleviate a shortage of socks that had not lost their original colour, or developed more holes than intended, and their disappearance required a visit to Marks and Spencer, the source of reliable socks that are not prone to absence without leave. Standing staring at the varying shades of grey and black, a label declared that one variety contained ‘100% mercerised cotton’.

‘Mercerised’ sounded a bona fide term. There were tradesmen called mercers at one time. Google revealed that ‘mercerised’ described a process that strengthened and improved the appearance of fabric – why could the label not just have said ‘stronger, longer lasting, better looking’?

Jargon is not usually the preserve of Marks and Spencer, who have been a source of solid, sensible, good valued clothing to a clergyman of limited means for the past three decades. Jargon is more often employed by the snake oil salesmen of our world, those wanting to cover up for the fact that their product does not do what it says, or want to make claims they know to be unwarranted for something they wish to sell. Jargon is the talk of the call centre man who cannot offer a reasonable explanation of why the expensive Internet connection is so poor, or the man in the electronics shop who has little idea of what the device can really do, or the financial services person trying to explain away the fact they have lost your money.

Of course, jargon is also the preserve of clergy. Many of the words used in the ordinary life of the church do not conform to the norms that apply to everyday life. Asked to provide verification of what we claim, we cannot do so, relying on circular arguments that say what we say is so because we say it is so.

Sometimes, there is more evidence for the activity of a sock-eating monster than there is for the claims of preachers. Perhaps we need to be mercerised.