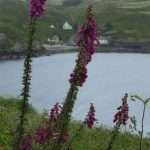 ‘Only when I go to the mainland do I become aware of living on an island’.

It seemed an unlikely assertion. Surely, living in a community of just a hundred and twenty people with everything arriving by boat, there was a daily sense of the insular? But might he not have pointed a finger back, ‘don’t you live on an island? What awareness have you of being insular?’

Aren’t islands a matter of perspective?

A woman I knew in the North came from Cumbrae in the Firth of Clyde. Blessed with a wonderful sense of humour, she would tell a story of the minister on Great Cumbrae who would stand in the kirk on the Sabbath and pray for the islands of Great and Little Cumbrae and for the offshore nations of Scotland and England.

Of course, the man in the community of ten dozen souls and the reverend gentleman offering intercession on Sunday would both have been right. Geographical insularity is the natural order of things in this small archipelago of islands off of the North-West coast of Europe. There was a question alleged to have been on an Irish examination paper in the 1980s.

‘What is the biggest island off the coast of Ireland?’

The geographer’s answer was Achill. The schoolboys’ answer was Britain.

Growing up in England in the 1960s and 1970s, there would have been geography lessons reminding us how close the sea was to each of us and history lessons on the importance of the sea to the power and wealth of imperial times. Had Britain not been an island, waves of invaders would have swept through in successive centuries and the opportunity to use the sea to national advantage might never have arisen. (It is hard now to imagine how dominant Britain became, militarily and economically; in 1913 it accounted for 44% of all international investment in the world).

‘Only when I go to the mainland do I become aware of living on an island’, said the man. It is a feeling not confined to the man, setting foot on French soil, there is always a sense of having arrived from an island.

Maybe we all live on our own islands, though, or at least wish to do so. How many people have bought houses in Europe ‘to get away from it all’ to be physically and psychologically removed from their former contexts? One would hardly describe Provence or the Costa del Sol as islands, but they play that very role for many who go there.