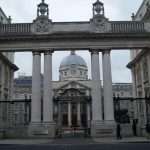 ‘Torpor’ is defined as ‘a state of mental and motor inactivity with partial or total insensibility’.

‘Torpor’ was painted in large black letters in the stairwell of the flats on the edge of Manchester’s Moss Side. The area had exploded into rioting in the spring of 1981, but by the winter, with its cold Lancashire drizzle, there was an air of resignation and hopelessness.

The stairwell stank constantly of urine; the lifts did not work for much of the time, and, when they did, smelt even worse. The occupied flats were those with boards nailed over the windows; not to cover your windows invited the removal of the window frames and the removal of your furniture by opportunists who prowled the walkways that passed the front doors. (One night, a flat that had been boarded up was cleared by men gaining access from the roof of a removal van). The only dwellers in the crescents were students, for whom the tiny rents represented a chance of avoiding debts, and vulnerable people who could find nowhere else.

‘Torpor’ seemed an odd thing for anyone to paint; maybe it was the name of a punk rock band, a few of which were still around; maybe it was just a considered comment on the state of insensibility to which people seemed to have been reduced by a cocktail of crime, violence and institutional neglect.

Torpor arising from hopelessness seems understandable, but the torpor that seems to have gripped an affluent, articulate and vibrant Ireland seems less so.

This week, day after day of revelations of the fraudulent deceits of Anglo Irish Bank in 2008 have caused ripples, but no waves. A handful of calls on the Internet for a ‘revolution’ and mutterings from politicians about the need for an ‘inquiry’, but a €30 billion scam will pass without change. There will be indignation, and then resignation.

More than forty years ago, Nobel laureate Dario Fo used humour to ask fundamental questions about our political systems. Accidental Death of an Anarchist was published in 1970. Set in Milan, it was inspired by the death of an anarchist in the city in 1969, who mysteriously flew out of a fourth floor window of a police station during questioning. It has gone through constant adaptations. In one of its English forms, a 1980s adaptation, one of the more reflective sequences suggests that scandals, such as this week’s revelations serve not to change, but to reinforce the system .

REPORTER. . . . scandals are the breeding ground of reaction?

A burp of indignation and then all will proceed as before.