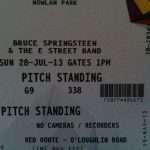 The concert is two weeks away and it is time to fill the car with music from the Boss. Is there time to listen to all the albums between now and then? Counting Bruce Springsteen discs on the shelf, there is a sense of being engaged in irrational behaviour. The twenty or so albums are not a complete catalogue, there are still omissions; but what matter? Why feel a compulsion to tick off every item on the list? What difference does it make to the enjoyment of an album that its successor is missing from the collection? What difference does it make to the enjoyment of the concert that every song since 1972 has not been played?

A tale is told of a music professor who would be tormented by his students at the dead of night. There was a practice room just below the professor’s college rooms and they would go in during the early hours of the morning and play an arpeggio on the piano, repeatedly leaving out the final note. The professor would finally come down the stairs in his dressing gown, the sound of his approach scattering the students, and play the single missing note. He could not bear things not to be complete.

The professor’s behaviour was completely irrational; why stir from his bed when he could have sung the missing note to himself?

Perhaps there is an odd instinct to have public completeness, not want anyone to see something is missing, whether it be a Springsteen CD or any other item in a sequence. Perhaps it’s like the cards you used to get in tea packets and stick in an album, or the coins that Esso used to give out with petrol to mark the World Cup (somewhere in this house there is a board holding 30 coins bearing the images of England’s 1970 World Cup squad – an aunt worked at a garage and helped me collect them).

The urge to complete collections of things, to make sure all the notes are there, once prompted the purchase of the collected plays of Samuel Beckett.

Beckett would presumably have regarded the idea of completion of a set as pointless; he sent his agent to collect his Nobel Prize, feeling no compulsion to attend a ceremony that most writers would have felt to be the culmination of their career.

As Beckett’s work progresses, it seems to become more sparse, have more gaps, have bigger and bigger areas the reader must complete. There was never an abundance; Vladimir and Estragon in Waiting For Godot are left without meaning or direction. In his 1981 play ‘Quad’ words are dispensed with altogether, anonymous figures pace back and forth across a square while percussionists play to accompany the movements. Maybe Beckett is the counterpoint to the music professor; maybe completeness is not in adding but in subtracting, taking elements away one by one until everything is completely gone.

‘Freedom’s just another word for nothin’ left to lose’ says Kris Kristofferson’s line from ‘Me and Bobby McGee’. Maybe he’s right; maybe collecting things is just a denial of the way things are. (Janis Joplin’s version of that song is among the CDs, but not Kristofferson’s, there’s an omission that needs attention).