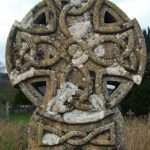 A £90 cheque in the spring  for an 850 word piece covered the cost of the year’s subscription to the  Church Times though there are weeks when doubts still arise as to whether it’s worth it. With no Saturday post here, the Church Times, dispatched from the East of England on a Thursday, takes four days to reach rural Ireland, and, having lost the currency of immediacy, is not necessarily read on a Monday.

So it was, sitting down to porridge at 7.45 this morning, the Church Times was spread across the kitchen table. Half slept and irritable, the thought occurred that the subscription was really for a single item: Ronald Blythe’s ‘Word from Wormingford’ column on the back page, why carry on paying for news of churches and bishops whose reality was so far removed from rural Laois that they might be in Australia?  Blythe’s column is only a few hundred words long and is quickly read, though demands a second reading for the appreciation of the beauty of his prose.

Without reason, there is a sudden inclination to read the obituaries.  The decision is without logic, there is only one Church of England priest whose passing would have a personal significance. It is a long time since the column has been read, yet in the week the obituaries are checked, his name is there; he died on 1st July aged 93. There is a sense of sadness. On the odd occasion through the years, he would have written, usually a note of congratulation on one of the appointments that have marked my itinerant clerical career. His neat hand and elegant phrases would bring brief news of his family. The last correspondence was three years ago.

How strange. He was only 58 when we first met, a mere six years older than I am now, but seemed a man much older. He had read mathematics at Cambridge and had been an officer in the British army during the war, being among those who had followed the path of holy orders when peace returned.

What had he really thought of the times in which he ministered? His son and I drank beer and went to rock concerts together; what we did not do was to go to church. Not once did he ever make a comment that smacked of preaching, not once did he ever comment on how alien our words and ideas seemed to him.

Among the assorted memories are those of his car. He bought a new Renault 4 in 1978, a car that was obsolete even then; its dashboard gear shift was the mark of engineering of a former age. Perhaps the car matched the church the man served so faithfully; a model from a former age gamely making its way through a world that no longer wanted it.