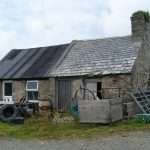 “Mrs Murphy had cats, eleven of them. Her cottage had a galvanised iron roof laid over thatch and if there was a cat missing you had only to look up into the roof of the kitchen and there would be a pair of eyes looking down from the thatch – usually waiting for something.

When she ate her dinner, she would pick up the food on her fork and bring it in a big loop upward and then down to her mouth; if she brought it straight to her mouth, one of the two cats sat on her lap would have made a grab for it.

Sometimes she would offer you something to eat; tea and bread and butter. The teapot would be black with soot and, to keep the bread away from the cats, she would hug the loaf to herself, the end of the loaf she was going to cut pointing up towards her chin, then she would cut off a slice with a big knife, sawing towards herself each time. The slice would then be handed to you, with four sooty fingerprints on it.

Do you know? She lived until the age of ninety-five and at the age of eighty-five was to be seen out working on the bog, bringing in the turf, as fit as you or I”.

Were Mrs Murphy a figure from Irish literature she would seem more likely a character from the satirical writing of Flann O’Brien than from the social realism of John McGahern, except that she wasn’t a fictional character, she was flesh and blood reality, sooty hands and all.

The survival of the ‘characters’ in an age of mass media and increasingly monochrome culture has been extraordinary. There are people who seem to have a capacity to remain completely impervious to social trends and peer pressure. The advertising executive’s nightmare and the storyteller’s dream, the characters are rugged individualists, uncaring of the opinion of others, untroubled by remarks of others, no matter how cutting.

The characters can be subjects of photographic collections and oral history; museum pieces, living artefacts, curiosities. Maybe they offer insights into a past that still exists only in them, but much more interesting would be the insights they offer into the present. What is it in them that allows them to become ‘characters’? What personality traits allow such a degree of independence from the world around? What, from their psychological make up, might we learn in order to be autonomous people; what might we learn about being ourselves in a society that tells us to be very different people?