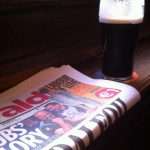 Sometimes there is a sense of guilt in doing things others cannot do; sometimes there is a sense of guilt in even doing ordinary things when the circumstances of others prevent them enjoying those things. Once, going to a concert the night before a funeral, there seemed almost a furtiveness in travelling back through Dublin. It was as though someone somewhere was waving a finger of rebuke at such behaviour. ‘Did we not know there were people in mourning? What did we think we were doing, out listening to music and drinking beer?’

Days when there is the familiar feeling of living in two worlds have become, in my mind, ‘naming of parts’ days, called thus because Harry Reed’s World War II poem ‘The Naming of Parts’ conjures a sense of contrasting realities. As Reed and his companions are instructed in the art of using a gun, with which they are to kill other young men, he ponders the springtime beauty of the gardens around:

This is the safety-catch, which is always released
With an easy flick of the thumb. And please do not let me
See anyone using his finger. You can do it quite easy
If you have any strength in your thumb. The blossoms
Are fragile and motionless, never letting anyone see
Any of them using their finger.

They call it easing the Spring: it is perfectly easy
If you have any strength in your thumb: like the bolt,
And the breech, and the cocking-piece, and the point of balance,
Which in our case we have not got; and the almond-blossom
Silent in all of the gardens and the bees going backwards and forwards,
For to-day we have naming of parts.

Reading the poem at 15 years of age in a class for CSE English Literature, it had not the power it later assumed. At 15, there was little in life by way of contrast or contradiction. Checking the poem on the Net, there was a link to the edition of the New Statesman and Nation in which the poem appeared on 8th August 1942. The magazine which leads with comment on German military victories over Russia contains much that is a contrast; reviews of The Merry Wives of Windsor and other West End productions.

Reed’s poem has become a way of coping in a parish; acknowledging the conflicts and, in doing so, disarming them of their power.