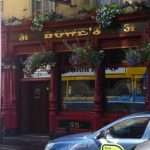 Thrown out, twice in one evening, I had never returned.

August of 1981 was probably not the best time to have short hair, an English accent and a desire to buy a pint in a Dublin bar for the very first time. The hunger strikes had polarised opinion, black flags flew, and no-one knew what turns the future might take. Perhaps we were thought to be British soldiers, though their visiting Dublin in those years was not just unlikely, it was prohibited; perhaps it was thought we might be sympathetic to Mrs Thatcher, who had been unswerving in her determination to make no concessions to the hunger strikers; perhaps being English was sufficient to arouse the ire of the batman.

We had tried early on the Saturday evening, when the bar had been quiet, “we don’t want you in here”, the barman had said. Going elsewhere, we had returned later in the evening when the place was full, “I thought I told you earlier, you’re not wanted in here”, had come the voice over the heads of those seated in stools at the bar.

Our motivation for visiting the bar had been tales that it was the place to meet with Dublin’s journalists, we had naively imagined that we might meet and converse with people who had stories to tell. If there were storytellers sat with pints of stout, we were not going to hear them.

We had left and crossed the river and had spent the evening at a bar on the North side; its republican sympathies were apparent, and became even more so when two men came around collecting money for the families of the IRA prisoners in the North.

A couple of years later, encountering one of the journalists who would have frequented the bar, he assured me that it was not such a bad place and that we must have caught the barman on a bad night. Bad night or not, there was no desire ever again to set foot in the place.

Even eleven years living in Dublin, from 1999-2010, during which the bar had been passed many times, there had been no inclination to go in and ask for the pint of stout sought two decades previously; if they hadn’t wanted custom then, they could do without it now.

A phone call was made this evening to arrange meeting for a meal. “Is 5.30 OK?”

It was still only five o’clock. Passing the front of Trinity College, it began to rain; by the junction of Westmorland Street and Fleet Street, it was pouring. The bar was barely more than a few steps down the street. Going in, the barman looked up, “Yes, sir?”

“A pint of Guinness, please”.

Thirty-two years on from August 1981.

If getting over being thrown out of bar can take thirty years, how much harder is it for people who really suffered in those times?