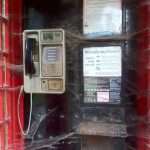 There was a French short film back in the 1970s about a man in a telephone box. Maybe it was subtitled in English, probably not, there was no dialogue important to the plot.

The man steps into one of the phone boxes that were new at the time – hexagonal, six glass panel walls were held in place by uprights that stretched from a steel floor to a steel ceiling; the telephone was mounted on the wall opposite the panel that opened as the door. He makes a telephone call and the horror of the film begins. As he turns to leave, he finds the door is stuck fast and he cannot get out. He tries to phone for help, but finds the telephone no longer works. The man is in despair and is delighted when it appears rescuers have arrived. However, they do nothing to release him, instead they use a crane to lift the box, with the man still trapped inside, onto the back of a lorry. The lorry transports the phone box to a warehouse filled with phone boxes and it is unloaded. The man stares out at the phone boxes all around him, each with a corpse or skeleton inside, and realizes the horrible fate that awaits him. Perhaps it was one of those films that connected with primeval fears, it abides deep in the sub-conscious.

Seeking shelter from a thundery August deluge, the telephone box on the village green offered the prospect of refuge. Opening the door and stepping in, the experience of being engulfed by cobwebs was something from ghost stories of childhood years. Instinctively, stepping back to ensure that the door did not close and leave me awaiting a lorry that would carry us away, the interior was a sad sight. A notice from British Telecommunications advised that the phone box received insufficient use to justify its continuance and that it could be bought by the community for £1, to remain as a box without a phone, or that it would be removed altogether. Dated August 2009, the notice was perhaps the last interruption to the work of the spiders. BT seemed hardly assiduous in fulfilling their threats.

Many hours were spent in that box in teenage years, feeding twopence and tenpence pieces into the slots, talking to people in far away, and not so far away, places. It is an experience that will be unknown in the future, is there now anyone under the age of 30 who depended on a phone box as their main channel of communication? Perhaps the box will be left there and people passing in a generation’s time will ask its purpose and will laugh at the thought of putting coins in a box in order to speak to someone.