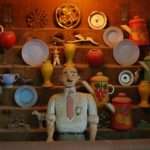 It is a while since a serious conversation with a six year old, a while since encountering world where anything is possible, a while since a magical realism worthy of the novels of Gabriel Garcia Marquez. Why shouldn’t the digital fish in a virtual aquarium live on a diet of postmen? Why shouldn’t a line of cars across the carpet constitute a traffic jam so long that the police must come and arrest the driver at the front?

Of course, if we have ever had such thoughts since the age of six, we are hardly going to admit it. The American writer Garrison Keillor understands those thoughts that we have in childhood days, that we are never going to repeat in our adult years, and certainly not if anyone is going to laugh at us about what we tell them. Keillor reassures us that we aren’t the only ones to have had such ideas.

And there is reassurance as well in Clarence Bunsen’s reflections. “It’s the same thing I looked at forty years ago”, he says. There is a continuity in childhood experience.

Conversation with a six year old is a reminder that Fords can fly and that virtual fish dine on imaginary postmen, and that any version of reality is possible.