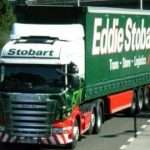 The byroad from Mountrath to the village of Coolrain is a place to meet familiar traffic, cars driven by local residents, tractors on routine rounds, timber lorries bound for the sawmills. To encounter a Stobart lorry was unexpected, its green and red livery, distinctive and unmistakeable.

In the early 90s, Stobart lorries evoked a former age, finely painted coachwork, polished chrome, collar and tie attired drivers. The policy was deliberate, it was to send a clear message that they took business seriously and would take customers seriously. The fleet then was a fraction of its present size, maybe two hundred trucks, ten per cent of the current fleet of over two thousand, and none would have been encountered on the back roads of rural Ireland.

The first sighting of a Stobart lorry each year was a special moment, generally on the M6 motorway in Cumbria. To be travelling the same road as a Stobart meant being holiday bound. If our southward journey was long, how much longer must theirs have been? Their trade mark colour scheme gave no clues as to cargo or destination; their corporate uniformity gave them an anonymity and a reassuring quality. Unless the number plate had been noticed, one might overtake the same lorry numerous times and assume it was different on each occasion.

Since childhood days, there seemed always an air of mystique around long distance lorries, perhaps the constant change of scenery, perhaps the travelling to new places. To journey for hours, undisturbed, solitary, silent, seemed not such a bad way of life. In those years, two decades past, my car would have been filled with BBC audio cassettes; novels, drama, poetry even, to have been allowed to spend the days listening to the voices of storytellers would have been an attractive option.

Reaching the channel ports in those times would have brought a change of the livery that was pervasive, the green and red of Eddie Stobart being replaced by the red and white of Norbert Dentressangle, the combined strength of their fleets today would be sufficient to transport a large army across Europe.

Undoubtedly, the life of a driver is altogether more prosaic than might have been imagined by someone bound for holidays: delays, jams, paperwork, fatigue, loneliness, a thousand and one petty annoyances that might make them wish to be at home doing anything other than driving a vast vehicle hundreds of miles, yet, given a second chance at a career, it would be an intriguing prospect.